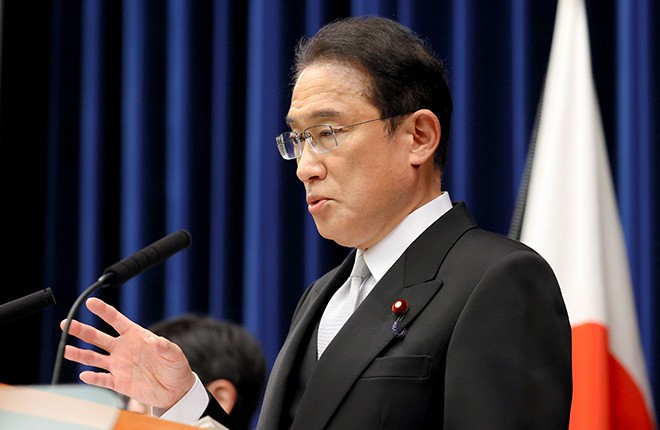 To avoid a repeat of the summer’s health crisis, Japan will set aside hospital beds for more than 35,000 COVID-19 patients this month in preparation for a possible winter wave of infections.

“We are building a system by the end of this month that will ensure hospitalization of more than 35,000 patients, which is a 30 percent increase from this summer,” Prime Minister Fumio Kishida said at a news conference on the night of Nov. 11.

In outlining the government’s strategy against a resurge in new infections, Kishida said 10,000 additional rooms at hotels would be secured for COVID-19 patients with mild symptoms to recuperate from the disease.

That would be a 20 percent increase from the number in the fifth wave of infections this summer, when tens of thousands of infected patients could not receive proper medical care.

The government announced on Nov. 10 that it had reached an agreement with U.S. pharmaceutical company Merck & Co. to buy enough of its oral drug, molnupiravir, for 1.6 million people.

The 135 billion yen ($1.18 million) deal is expected to reduce the burden on medical centers because patients can take the mediation at home.

Kishida called the drug a “powerful card” to rein in the pandemic.

“We are working to make it available to the public by the end of this year,” he said.

The first batch of molnupiravir, for 200,000 people, may become available by the year-end at the earliest, depending on how soon it will be authorized, according to the health ministry.

As for booster shots to enhance immunity against the novel coronavirus, the government will assist local authorities so that they can start providing the third doses in December.

People who received their second doses more than eight months ago will be eligible for the booster shots. Health care workers will be at the top on the list of priority groups.

To accelerate the creation of a domestic COVID-19 vaccine, the government will provide 2 billion yen per medication being developed by Japanese companies.

Each hospital treating COVID-19 patients will be required to disclose the number of beds secured and the monthly occupancy rate, Kishida said.

Hospitals within the same prefecture will also be encouraged to share information about the availability of their beds on a daily basis so that infected patients can be admitted to hospitals without the long waits seen in summer.

In addition, each of the country’s 47 prefectures is expected to announce the number of patients taking COVID-19 medications as well as records on telemedicine services and visits to patients’ homes by doctors each month. Such disclosures are intended to enlist the help of local clinics in the fight against COVID-19.

If a new wave of infections involves a strain that could be three times more contagious than the Delta variant that raged during summer, treatment of patients with other diseases will be restricted in regions where risk of contracting the virus is deemed low.

The planned step is intended to send health care workers from low-risk regions to large cities where the contagion risks are high and the ratios of medical staff and beds are smaller in proportion to their total populations.

(This article was written by Kai Ichino, Taishi Sasayama and Keishi Nishimura.)