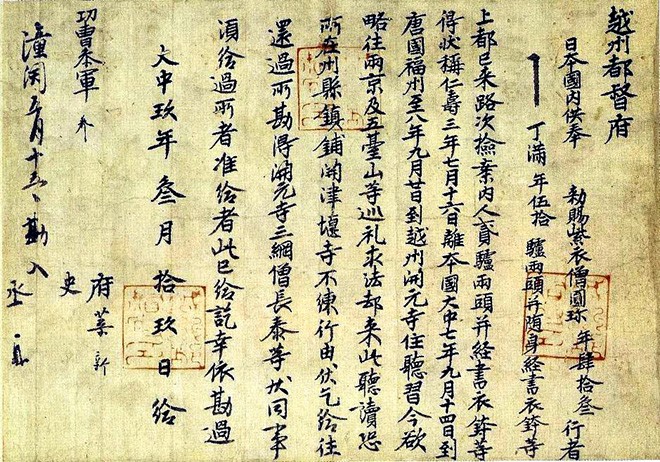 A document from the time of Heian Period monk Enchin, founder of the Tendai Jimon sect (Provided by Onjoji temple)

Two sets of historic Buddhist documents, one well over 1,000 years old, are being recommended for inclusion in UNESCO’s Memory of the World register.

One set of documents concerns Tokyo’s Zojoji temple, the head temple of the Jodo Sect of Buddhism, while the other set revolves around Enchin, a monk in the Heian Period (794-1185) who founded the Tendai Jimon sect after bringing back the teachings of Chinese Esoteric Buddhism from Tang Dynasty China.

UNESCO’s International Advisory Committee is scheduled to decide on registration in 2023.

The Zojoji documents were collected from around the nation at the behest of Tokugawa Ieyasu (1542-1616), the first shogun of the Tokugawa Shogunate, and later donated to the temple located in Tokyo’s Minato Ward.

The set contains about 12,000 printed items that were initially carved on wood and are designated as an important cultural property. Not only do the documents provide the foundation for contemporary Buddhist research, but they are also important from the standpoint of understanding kanji culture as well as printing techniques of that time.

The documents concerning Enchin are designated as a national treasure and include the actual pass the monk used to gain access for travel around China. The set is considered extremely important in the context of the history of cultural exchanges between Japan and China as well as for learning about legal matters in Tang Dynasty China and its transportation system.

Recommendations to UNESCO had been suspended since 2017 after Japan raised objections to the 2015 registration of the records of the Nanking Massacre and asked that the evaluation procedure be revised.

In April, UNESCO approved revisions to the program under which no candidate recommendation will be registered if a relevant nation objects.

With the resumption of the program, the education ministry received 11 applications and decided to recommend two.