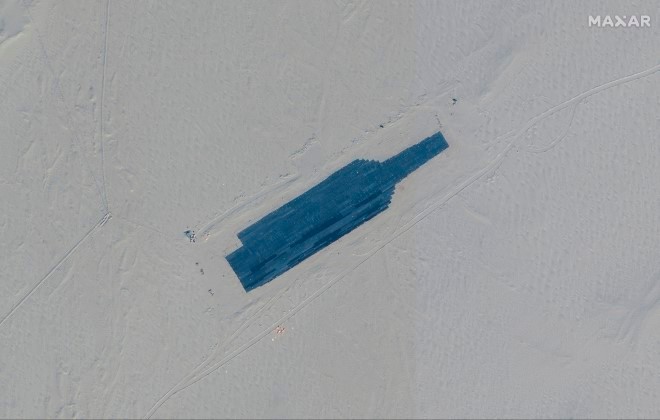 This satellite image provided by Maxar Technologies shows a designated area in Ruoqiang county, China, Wednesday, Oct. 20, 2021. Satellite images appear to show China has built mock-ups of U.S. Navy aircraft carriers and destroyers in its northwestern desert, such as one in this image, possibly as practice for a future naval clash as tensions rise between the nations. (Maxar Technologies via AP)

The mockups--which range from a simple silhouette of what appears to be America’s new Ford class aircraft carrier to a more sophisticated model of a U.S. destroyer mounted on a railway track--were revealed in private satellite footage and published by the United States Naval Institute, which said they appeared to be part of a weapons testing range.

Exactly what weapons China Beijing has or will test against warships is unclear--but it clearly has ever more to choose from. Last week, U.S. Chairman of the Joint Chiefs General Mark Milley described Beijing’s reported test of a hypersonic missile that circled the earth as close to a “Sputnik moment,” a reference to the Soviet Union’s Cold War space breakthrough.

The United States has struggles with its own hypersonic missile program, and some in Washington fear their development may allow China to overwhelm U.S. defenses. And even as specialists worry China may be gaining an edge in areas such as hypersonic missiles and artificial intelligence, Beijing is also investing substantially in existing nuclear and conventional arms types.

In an annual 192-page report to Congress this week, the Pentagon said Beijing’s military build-up aims to reshape the global order. That included expanding its nuclear stockpile from a number of warheads in the low 200s to as many as 1,000 by 2030, it suggested, alongside more conventional forces.

Nor is this the only arms race. A study published this week by Georgetown University’s Center for Security and Emerging Technology scrutinizing Chinese military procurement documents showed the United States and China spending roughly equal amounts on military artificial intelligence, around $1.6 billion a year, sometimes procuring almost identical technology--often from U.S. firms--with the impossible aim of pulling ahead from each other.

Arguably, it is the conventional military balance that remains the most important, one reason for the Chinese focus on finding ways to target U.S. warships. In numerical terms, the People’s Liberation Army Navy is already the largest in the world, with a force of approximately 355 ships and submarines expected to reach 420 by 2025 and 460 by 2030.

In its ability to project power around the globe, that force remains more limited than the United States, with its 10 Nimitz class nuclear aircraft carriers and the “Ford” class vessel also entering service. Analysts say China will likely launch its third aircraft carrier early next year, a significantly more advanced variant than the two it already has.

The United States may spend up to $500 billion a year more on defense than China, but that money is spread around the globe. Beijing knows exactly what it wants to achieve with its resources--a degree of global reach, but primarily the ability to dominate its immediate neighborhood in the event of a conflict over Taiwan or the South China Sea.

That is a prospect that already worries the United States, prompting mounting calls in Washington for the Pentagon to redeploy more forces to the Pacific and leave other allies such as those in Europe to protect themselves.

Beijing’s basic plan in the event of war seems clear--overwhelm any nearby opponents such as Taiwan or nearby U.S. forces with missiles and other firepower, simultaneously using long-range missiles to threaten the U.S. mainland and deter further attack.

All of that, however, also looks likely to be mixed with emerging technology only just being understood.

In Guam, the United States is testing Israel’s Iron Dome missile defense system with a view to protecting against Chinese missiles. The truth, though, is that Beijing represents a very different threat to the Palestinian militants whose rockets Israel faces, or even the more sophisticated missiles and drones of Iran and its proxies in the Middle East.

More than a third of the Chinese military contracts the Georgetown AI researchers found were for systems related to autonomous vehicles, including flying and self-targeting drones that could be used to overwhelm air defenses of an adversary like Taiwan. That included simply buying off-the-shelf drones and associated technology including from U.S. firms, the report said, with Beijing simply buying up cutting-edge U.S. technology where export controls allowed.

That appears part of a wider trend--the reliance of Chinese military systems on chips designed by U.S. firms like Intel, NVIDIA and Xilinx, often manufactured in Taiwan. Sometimes images of these processes were included in marketing material.

Neither country seems happy with this--the United States is looking to tighten export controls, while Beijing wishes to reduce its dependence on U.S. firms and Taiwan. The speed of the arms race, however, complicates efforts by both to achieve those aims.

As well as using the same kit, Washington and Beijing are also often focused on the same things. The majority of spending by both, the Georgetown researchers found, was on AI tools to interpret intelligence and facilitate military decision-making--as well as, in China’s case, to strengthen the hand of its security state.

Most of that technology is aimed at supporting human decision-makers, not replacing them. But if they ever come to fight, the question is whether there may simply be too many moving parts for anyone to truly understand--and what that means for the choices that get made.

Peter Apps is a writer on international affairs, globalization, conflict and other issues. He is the founder and executive director of the Project for Study of the 21st Century; PS21, a non-national, non-partisan, non-ideological think tank. Paralyzed by a war-zone car crash in 2006, he also blogs about his disability and other topics. He was previously a reporter for Reuters and continues to be paid by Thomson Reuters. Since 2016, he has been a member of the British Army Reserve and the UK Labor Party.