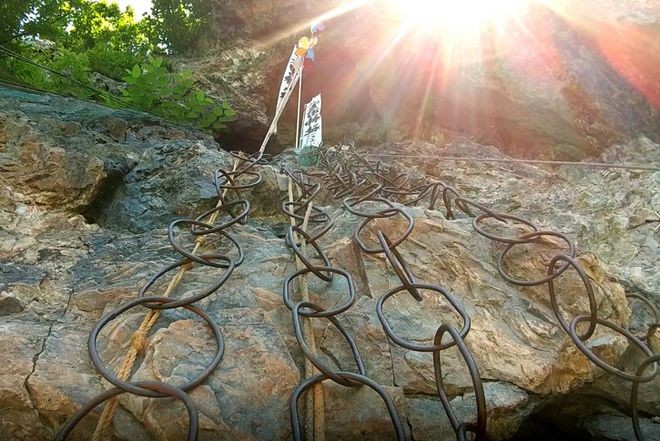 SETANA, Hokkaido--A rising number of people are putting themselves in danger of bone-fracturing tumbles, crushed skulls by falling rocks and wild animal attacks to reach a shrine that honors a deity for safety.

Otajinja shrine in Taisei district here is well known for its pedestrian approach, described as the “most life-threatening” in Japan.

Despite its unusual location on a precipice, more tourists are visiting the shrine as outdoor activities have gained in popularity during the COVID-19 pandemic and people are shying away from crowded environments.

Otajinja shrine is said to have been built from 1441 through 1443 in the Muromachi Period (1336-1573) to honor a deity for navigation safety and good catches of fish.

Although the shrine’s worship hall sits on the Sea of Japan coast, the main building was constructed in a rock cave halfway up Mount Otasan, the oldest sacred mountainous destination on Japan’s northernmost main island.

After going through the torii gate at the mountain foot, tourists heading for the main hall will soon be in front of a steep stone stairway.

The 45-degree stairway consists of 139 steps and should be ascended while holding a rope hanging from its top.

“The last part of the stairway boasts a level of steepness up to 50 degrees,” said an elderly parishioner of the shrine.

Visitors then need to trek along a mountain trail for a while, cross a stream and climb a ladder. The route has steep slopes, and ropes are set up along almost all sections to help hikers.

In an open space behind a forest is a 16-meter-long, 1-meter-wide bridge over a deep valley. Walking on the meshed structure brings visitors just below the main building.

The journey takes about an hour, but arriving at this point does not mean the trip is over. Visitors have to ascend a 7-meter vertical rock wall by carefully inserting their feet in an iron ring chain, like in stirrups, to reach the core part of the shrine.

After completing the climb, visitors can see a small shrine building in a rock cavern about the size of four tatami mats.

That spot within the mountain offers a breathtaking view of the Sea of Japan with Okushirito island in the distance.

Two company employees from Kobe said their “long-held dream” was to visit the shrine.

Glancing at the landscape below, one of the men said: “The trip was tough, but it was nice that we could see firsthand what the holy site is like. The descent here appears far more dreadful.”

Otajinja shrine holds its annual festival in late June. Young people in white costumes brave the risky route to pay their respects at the main hall and pray for maritime security on the event’s first day.

Although the festival has been canceled for two years because of the COVID-19 outbreak, a pack of tourists flocked to the shrine this past summer, including some from outside Hokkaido.

Isao Kawamura, 86, a representative of the shrine’s local worshipper group, said he does not want so many people to learn about the shrine.

“The ladder and other fittings are showing signs of age,” Kawamura said. “The location is really dangerous because of bears and falling rocks. I would like visitors to be particularly careful when going there.”