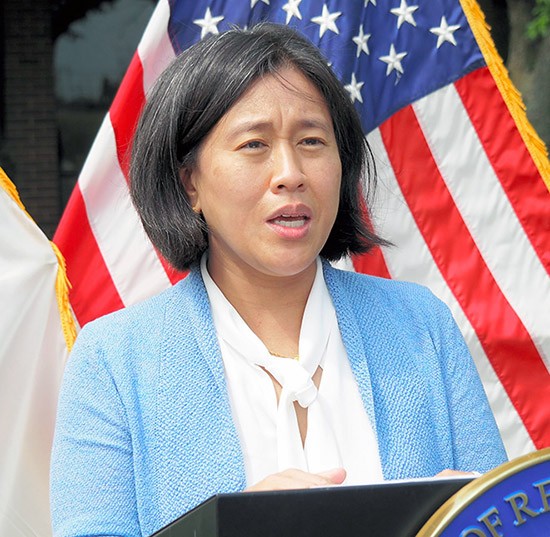 WASHINGTON--U.S. Trade Representative Katherine Tai on Nov. 10 expressed no appetite for having the United States rejoin the trade deal now known as the Comprehensive and Progressive Agreement for Trans-Pacific Partnership (CPTPP).

Tai held a news conference that day with a select group of reporters in Washington. The Asahi Shimbun was the only Japanese media organization in attendance.

Asked if the original Trans-Pacific Partnership (TPP) agreement had been a positive factor for global trade, Tai's response was lukewarm.

“The final signatures were put on more than five years ago now," she added. "And what we have been through since has been such significant lessons for us in terms of our trade policy here in the United States.”

The original TPP agreement was reached under the initiative of the United States and Japan. It sought to establish trade rules for the 21st century covering such topics as data transfer and intellectual property while also preventing China from playing the lead role in that process.

But Washington left the TPP under then President Donald Trump in 2017 and the CPTPP took effect from the following year.

Opposition among the American public toward free trade as symbolized by the TPP is considered one of the reasons behind Trump’s 2016 election win.

Though U.S. President Joe Biden played a key role in leading the U.S. effort to reach the initial TPP agreement, he has been less enthusiastic about rejoining the arrangement, likely due to political considerations.

In the meantime, China has tried to fill the power vacuum and applied in September for membership in the CPTPP. Taiwan soon followed suit.

Another item on Tai’s agenda when she is in Tokyo is the bilateral trade deal agreed to in 2019 by the Trump administration and then Prime Minister Shinzo Abe.

But Tai said she would not necessarily pursue the course charted by her predecessor, Robert Lighthizer.

“Instead of connecting back my trip to Japan to the last interaction that Lighthizer had with the Japanese counterpart, the key in my mind is ensuring that we are engaging the United States and Japan on the challenges and the opportunities that are most pressing for us,” Tai said.

Under the agreement reached with the Trump administration, negotiations were to have continued after the trade deal went into effect in January 2020.

Japan had considered automobile tariffs as the major focus of that second round of talks, but Tai indicated she did not feel autos should be the prime focus of future talks.

“That's like a perennial issue in our trade that goes all the way back to the 80s and maybe even beyond,” she said. “My focus really is on the concerns that we have today.”

The Japan-U.S. trade treaty held off on eliminating the 2.5 percent tariff on Japanese automobiles exported to the United States.

Japan considered getting rid of that tariff the priority issue in the second stage of negotiations because of domestic criticism that Tokyo had given away too much in the agricultural sector.

(Evan Ingram contributed to this article.)