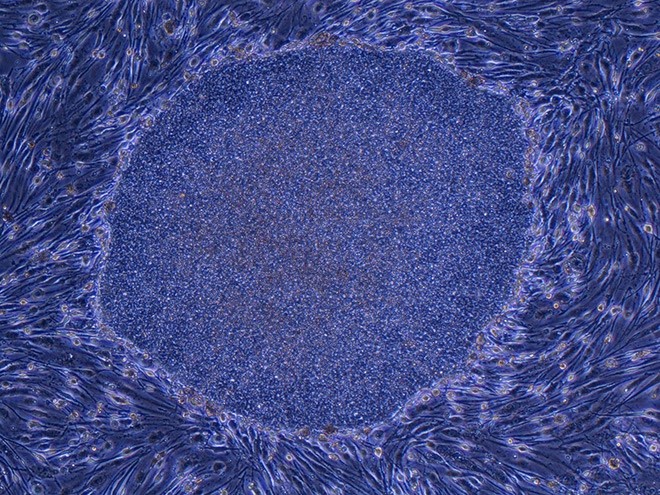 iPS cells made from human cells (Provided by Shinya Yamanaka)

A cancer patient undergoing a second type of treatment using induced pluripotent stem (iPS) cells has shown no adverse reactions to the immune cells injected into her body, researchers from Kyoto University and the National Cancer Center said.

The research team on Nov. 11 announced that in September, it had transplanted the immune cells derived from iPS cells into an ovarian cancer patient in her 50s being treated at the National Cancer Center Hospital East in Kashiwa, Chiba Prefecture.

The clinical trial is aimed mainly at determining the safety of the procedure and its side effects. So far, no complications have arisen, the team said.

The first cancer patient to have received iPS-derived cells was under the care of a Chiba University-led team.

In the latest case, the woman’s ovarian cancer had returned and spread as far as the peritonea.

The team injected tens of millions of natural killer cells into the patient’s abdominal cavity three times near the affected area.

These immune cells were derived from iPS cells collected and stored by Kyoto University.

The team hopes the attacking mechanism of the immune cells will target the cancer cells.

Led by Shin Kaneko, a professor at Kyoto University’s Center for iPS Cell Research and Application, the scientists inserted genes into the iPS cells to heighten their ability to recognize the cancer cells and improve the efficacy of the treatment.

The method is similar to the mechanism in Kymriah, a gene therapy medicine used to treat leukemia patients that is covered by health insurance.

The researchers said they inserted the genes into the iPS cells, which can greatly multiply, to secure a stable supply.

“We would like to put this treatment into practical use within a few years,” said Toshihiko Doi, chief of the advanced medicine department at the National Cancer Center Hospital East.