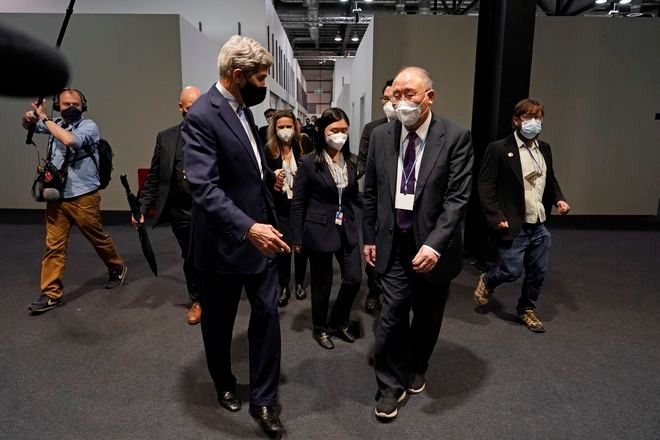 GLASGOW-- China and Saudi Arabia are among a group of countries seeking to prevent the UN climate deal in Scotland from including language that opposes fossil fuel subsidies, according to two sources close to the negotiations.

The issue of subsidies for oil, gas, and coal has become a major sticking point at the summit, where negotiators have already blown past a Friday deadline to strike an agreement aimed at keeping alive a goal to limit global warming to 1.5 degrees Celsius.

Existing drafts of the agreement negotiated over the past two weeks would request that governments unwind public financial support for fossil fuels, which scientists say are the primary drivers of human-caused climate change.

U.S. special climate envoy John Kerry told the summit on Friday that trying to curb global warming while governments spend hundreds of billions of dollars supporting the fuels that cause it was "a definition of insanity".

Other Western nations, including members of the European Union and Britain, are also pushing to keep the reference to removing fossil fuels subsidies.

The two sources, who asked not to be named because they are not authorized to speak publicly about the talks, said China and Saudi Arabia were pushing to have the language removed.

Efforts to reach the Saudi and Chinese delegations Friday evening were unsuccessful.

China, the world’s top emitter of greenhouse gases, is a significant oil and coal producer.

Earlier this week, China announced a joint agreement with the United States at the Glasgow summit to ramp up its ambitions to fight climate change, including by accelerating its phase down of coal this decade and by curbing methane emissions.

Saudi Arabia is a major crude producer and the defacto head of the Organisation of the Petroleum Exporting Countries.

Saudi Energy Minister Prince Abdulaziz bin Salman Al-Saud told the conference earlier this week that a deal to fight climate change should not target any one particular source of energy, arguing emissions can be brought down by other means. (Writing by Richard Valdmanis; Editing by David Gregorio)