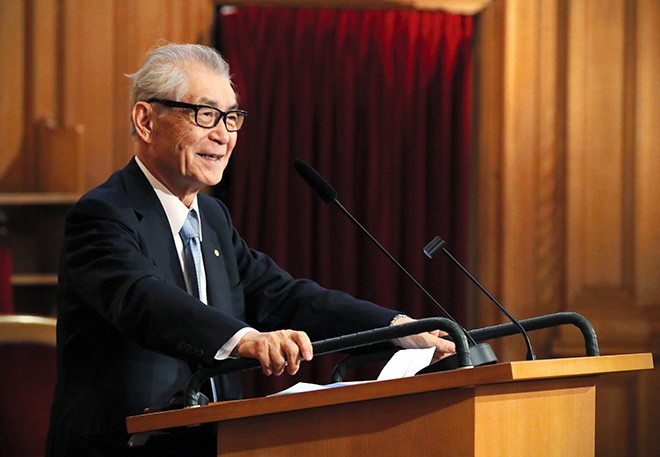 Tasuku Honjo delivers an address in Stockholm in 2018. (Pool)

OSAKA--Nobel laureate Tasuku Honjo’s long-running dispute with Osaka-based Ono Pharmaceutical Co. for royalties following his discovery of the anti-cancer drug Opdivo has finally led to a settlement in which the pharmaceutical giant will pay him 5 billion yen ($44 million) in compensation.

Tasuku Honjo, a distinguished professor of molecular immunology at Kyoto University, shared the Nobel Prize in Physiology or Medicine with U.S. immunologist James Patrick Allison in 2018 for their discovery of a protein that proved effective in the fight against cancer. Their research was the basis for developing Opdivo, which was manufactured and sold by Ono Pharmaceutical.

On Nov. 12, the two sides reached a settlement in which Ono Pharmaceutical will pay Honjo a lump sum of 5 billion yen and donate 23 billion yen to a research foundation established at Kyoto University to support young researchers.

Honjo, 79, will retract the lawsuit before the Osaka District Court and has also agreed to work with Ono Pharmaceutical to pursue pharmaceutical research and increase awareness of Opdivo.

Kyoto University will manage the research foundation. Neither Honjo nor Ono Pharmaceutical will have a say in who is selected to receive funds.

Honjo filed the lawsuit in June 2020 seeking the remainder of what he felt was owed him.

In a statement he issued Nov. 12, Honjo said: “We have been able to reach a satisfactory settlement. My aim is to support from a long-term perspective basic research through the funds that will be turned over by the company as well as through other donations.”

Gyo Sagara, Ono Pharmaceutical’s president, held a news conference the same day and expressed satisfaction at the terms of the settlement. He said the donation to the research foundation constituted a long cherished dream of the company.