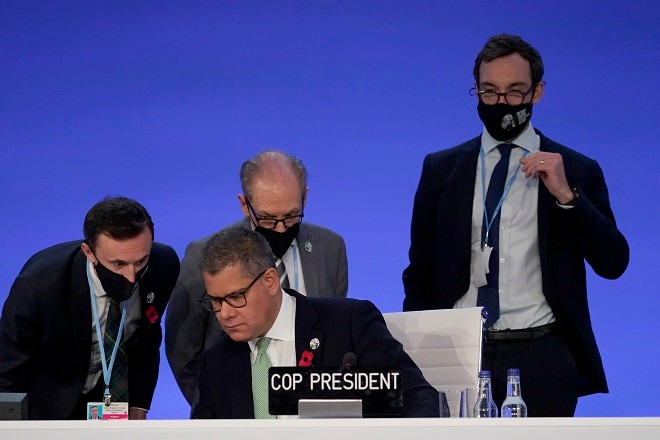 The final deal adopted by nearly 200 countries will implement Article 6 of the 2015 Paris Agreement, allowing countries to partially meet their climate targets by buying offset credits representing emission cuts by others.

Companies, as well as countries with vast forest cover, had pushed for a robust deal on government-led carbon markets in Glasgow, in the hope of also legitimizing the fast-growing global voluntary offset markets.

Critics worry that offsetting could go too far in allowing countries to continue emitting climate-warming gases, making some wary of a hasty deal.

The deal was "a Brazilian victory" and the country is gearing up to become a "big exporter" of carbon credits, its environment ministry said on social media. The country is home to much of the Amazon forest, and has huge potential to build wind and solar plants.

But nations most vulnerable to the effects of climate signaled concern over offsets possibly opening up for abuses allowing bad actors to avoid cutting emissions.

"On Article 6, we will need to remain vigilant against greenwashing," the Marshall Islands' Climate Envoy Tina Stege said in a statement.

The accord managed to overcome a series of sticking points that contributed to the failure of the previous two major climate meetings.

Previously, there was disagreement over a tax on certain carbon trades intended to fund climate adaptation in poorer nations. The deal addressed this with a compromise that had a two-track approach.

Bilateral trades of offsets between countries will not face the tax. The deal suggests developing nations capitulated to rich nations demands, including the United States, which had objected the levy.

In a separate centralized system for issuing offsets, 5% of proceeds from offsets will be collected to go toward an adaptation fund for developing countries.

Also in that system, 2% of the offset credits will be cancelled. That aims to increase overall emissions cuts by stopping other countries using those credits as offsets to reach their climate targets.

Another provision resolved how to carry forward carbon credits created under the old Kyoto Protocol, the Paris Agreement's predecessor, into the new offset market system.

Negotiators reached a compromise that sets a cut-off date, with credits issued before that date not being carried forward.

The final accord carries over any offsets registered since 2013. That will allow 320 million offsets, each representing a tonne of CO2, to enter the new market, according to an analysis by the NewClimate Institute and Oko-Institut non-profit organizations.

Campaigners had warned against flooding the new market with old credits, and raised doubts about the climate benefits of some.

The 2013 date "is not good. So now it will be buyer countries' jobs to just say 'no' to them," said carbon markets expert Brad Schallert, with the World Wildlife Fund.

One of the most contentious points had been on the question of whether credits could be claimed by both the country selling them and the country buying.

A proposal by Japan resolved the issue and gained backing from both Brazil and the United States. Brazil's past insistence on allowing double counting had torpedoed an Article 6 deal in the past.

Under the deal, the country that generates a credit will decide whether to authorize it for sale to other nations or to count towards their climate targets.

If authorized and sold, the seller country will add an emission unit to its national tally and the buyer country will deduct one, to ensure the emissions cut is counted only once between countries.

The same rules apply to credits used more broadly toward "other international mitigation purposes" - wording that some experts said could include a global scheme for offsetting aviation emissions, ensuring double counting does not happen there too.

Matt Williams, a climate expert at the Energy and Climate Intelligence Unit, said the final deal was better but not perfect.

"We've seen the worst possibilities for double counting of emissions cuts tightened up or guarded against. It doesn't mean it's ruled out completely."