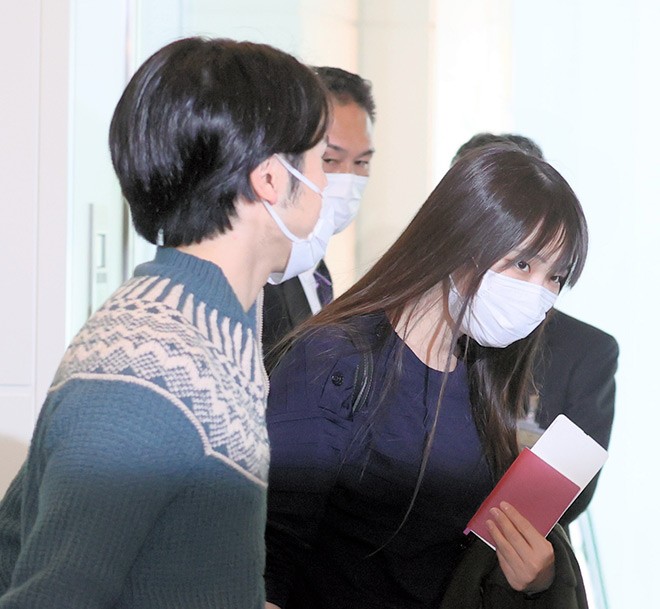 Mako Komuro and her husband Kei Komuro at Tokyo’s Haneda Airport before boarding a flight to New York on Nov. 14 (Tatsuya Shimada)

Former Princess Mako, now formally Mrs. Komuro, and her husband Kei Komuro left Japan for New York on Nov. 14 to make a fresh start away from the glare of public opinion, much of it negative following a financial family tussle that at times had seemed to threaten their years-long relationship.

Mako is the eldest daughter of Crown Prince Fumihito and Crown Princess Kiko and the niece of Emperor Naruhito.

A gaggle of 100 or so reporters were waiting to cover the couple’s departure when they appeared at the airport at 10:08 a.m.

Kei wore a green cardigan and jeans, while Mako dressed in a black ensemble of top and slacks, holding a black overcoat.

They headed to the departure gate after making a slight bow to the press corps.

When they set out for the airport from their apartment in the capital’s Shibuya Ward, a crowd of 60 or so people, including reporters, were gathered outside.

The couple, both 30 years old, married on Oct. 26. They have been an item since they studied together at university.

Mako was obliged under the law governing the imperial household to relinquish her status as a member of the imperial family and is now regarded as a plain commoner.

Her grandparents are Emperor Emeritus Akihito and Empress Emerita Michiko.

Kei is employed at New York law firm as an articled clerk.

He failed the New York state bar exam in July after graduating from a law school in the same state. He is expected to give it another shot in February while he is still retained by the law firm.

Kei returned to Japan late September, his first trip back in about three years, to help put the finishing touches on their nuptials.

(This article was written by Tatsuro Sugiura and Keita Yamaguchi.)