Kawaguchi city aims to vaccinate Kurds but can’t locate them 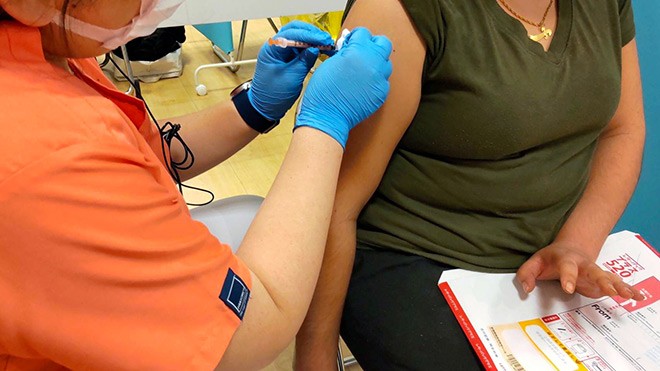 A Kurdish woman receives a novel coronavirus vaccine at a mass vaccination center in Kawaguchi, Saitama Prefecture, in October.

KAWAGUCHI, Saitama Prefecture--City officials here are struggling to vaccinate Kurdish people because of difficulties in locating them and providing accurate information about the COVID-19 vaccine program.

Bogus rumors about serious side effects from the shots have also led to a low vaccination rate among the Kurdish community.

An estimated 2,000 Kurds live in Kawaguchi, just north of Tokyo, and the neighboring city of Warabi, but municipal authorities have tracked the whereabouts of only about 500 of them who have registered as residents.

Many Kurds have no residency status and are on temporary release by the Immigration Services Agency, making it difficult to find them.

In late October, a man in his 30s and a woman in her 20s, both Kurdish, visited a mass vaccination center near the east exit of JR Kawaguchi Station.

They were accompanied by a woman from a support group.

“I wanted to get a shot as soon as possible,” the man said. “I was the only one who wasn’t vaccinated at my work place. I felt uncomfortable.”

But he had no idea how to get inoculated until the support group member informed him.

“I can’t get insurance because I’m on temporary release. If I get sick with the coronavirus, I can’t pay high-cost medical bills. I can feel safe now,” he said before receiving the dose.

Kawaguchi city set a municipal precedent by hammering out a plan in June to vaccinate Kurdish people and other foreign nationals, including those not registered as residents.

But it was not until Oct. 13 when the city started accepting applications for the program.

“We had help from other divisions, but we got caught up with a flood of applications from the public,” said an official in charge of promoting the vaccination program.

With so many Kurdish people in Kawaguchi, city officials considered setting an exclusive inoculation date with an interpreter on site.

The mass vaccination site was closed in November, but the city planned to reopen it on limited days.

However, only 70 people on temporary release had applied for slots as of Nov. 5.

A similar thing happened when the city conducted free polymerase chain reaction (PCR) tests in May and June.

Officials intended to cover 3,000 people, including 800 foreign nationals in Kawaguchi even if they were not registered as residents.

The municipality wanted the tests done because many Kurdish people live in groups, increasing the risk of cluster infections.

Of the 2,081 people who underwent PCR tests, however, only 78 were foreign nationals, including Kurds.

City officials have relied on the support group to learn general facts about Kurds, including where they live.

However, details are limited because only a few group members live in Kawaguchi and Warabi.

According to the support group, Kurdish people lack information about COVID-19 vaccines and are extremely worried about side effects, and many are shying away from the shots based on misinformation, such as the vaccine can cause infertility.

A man in his 20s replied, “There are many people who died after getting the shot in Japan.” Another twentysomething man said, “My wife is worried about the vaccine.”

Another respondent thought people on temporary release were ineligible for the shots.

The supporter said there is another reason the Kurdish community may want to avoid the city-administered shots.

“Many people are worried that they could be detained if an administrative office obtains their personal information in return for a shot,” she said.