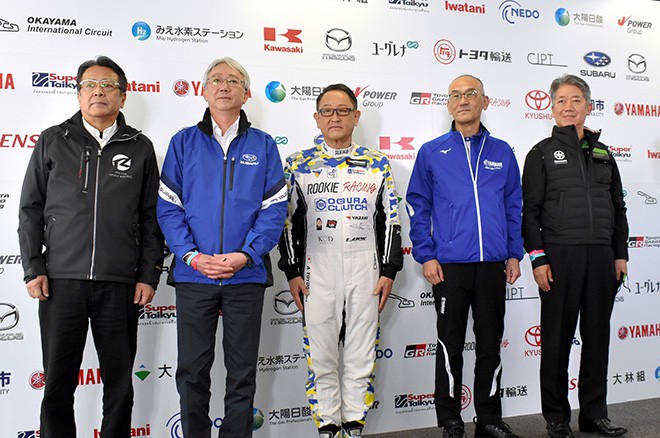 The heads of five major automakers pose for a photo shoot after a news conference at the Okayama International Circuit in Mimasaka, Okayama Prefecture, on Nov. 13. They include Akio Toyoda, president of Toyota Motor Corp., center, and Akira Marumoto, president of Mazda Motor Corp., far left. (Kohei Kondo)

Five major automakers are joining forces in a new pact to decarbonize their industry through developing cleaner engines and fuel sources.

They vowed to cooperate on the research and development of new fuel sources that can replace gasoline and work to create a hydrogen engine that does not emit any carbon dioxide.

The new effort comes as the entire auto industry looks to shift from gas-powered engines and ramp up the production of electric vehicles as the planet comes increasingly under threat from climate change.

The presidents of the five companies made the announcement at a joint news conference held at the Okayama International Circuit in Mimasaka, Okayama Prefecture.

“Our enemy is carbon,” Akio Toyoda, president of Toyota Motor, emphasized at the news conference. “There is a way for engines, too, to survive and develop.”

Mazda will enter the race with a vehicle running on biofuel that consists of microalgae called euglena.

The automakers intend to identify potential engine- and fuel-related issues that could emerge by entering the cars in races where they will be put to the test under severe driving conditions.

Kawasaki and Yamaha will begin joint research into hydrogen engines for motorbikes, with Honda Motor Co. and Suzuki Motor Corp. also expected to join this initiative.

The Japanese government and the major automakers did not sign onto a declaration at the COP26 U.N. Climate Summit pledging to work toward making all new car sales worldwide zero-emission vehicles by 2040.

Toyota said it did not sign the document because the company believes some countries and regions will take more time to transition to zero-emission vehicles and that there is more than one road to decarbonization.