Despite optimism for recovery, economy shrinks in third quarter 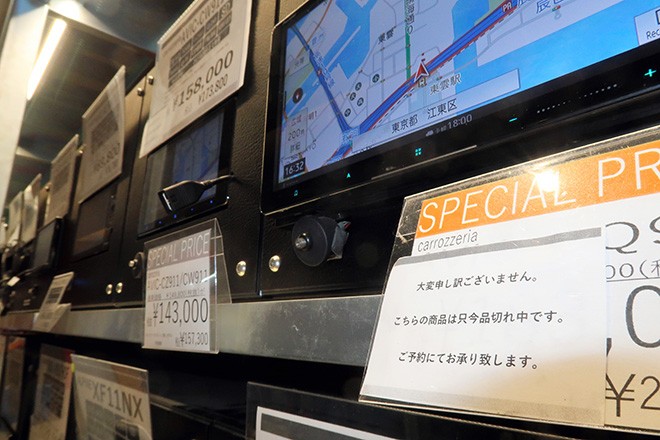 A sign states that car navigation systems are out of stock at an auto supply shop in Tokyo’s Koto Ward in August. A serious shortage of chips has hit the auto and many other industries around the world. (Asahi Shimbun file photo)

The latest government figures for gross domestic product could erode optimism that the Japanese economy in the October-December period will return to pre-pandemic levels.

The Cabinet Office’s preliminary figures released on Nov. 15 showed the economy in the July-September period shrank by 0.8 percent from the previous quarter and by 3.0 percent on an annualized basis.

It was the first contraction in two quarters.

Some economists warned that a number of factors could derail Japan’s economic recovery predicted to begin in the October-December period.

Confidence in a full recovery was fueled by the daily number of new COVID-19 cases moving well below 1,000 nationwide.

There are signs that personal consumption have picked up since the the state of emergency over the health crisis was lifted at the end of September.

A Cabinet Office survey of front-line people who are directly affected by economic trends, such as taxi drivers and retail salespeople, showed their assessment of economic conditions in October jumped 13.4 points from the previous month to a seasonally adjusted 55.5, the highest level since January 2014.

The Cabinet Office said the survey results have fueled optimism among government officials about the future of the economy.

The government’s prediction that the economy in the October-December period would match the level of the same quarter in 2019, before the pandemic struck, was based on expectations that the state of emergency would be lifted by around summer.

The lifting is expected to spark a solid recovery, including an uptick personal spending, which had been stifled by prolonged travel and other restrictions.

However, much of the nation was covered by the state of emergency well beyond summer.

But the pandemic is not over.

Year-end and New Year’s parties, key sources of revenue for bars and restaurants, will likely be significantly scaled back over concerns about a new wave of novel coronavirus infections.

The yen has also weakened against the dollar and is now in the 113 yen range.

The price of crude oil keeps soaring, leading to higher costs for food and other products in Japan. The national average price of regular gasoline rose to 169 yen ($1.50) per liter as of Nov. 8, the highest in about seven years.

And manufacturers in Japan and the rest of the world are still dealing with shortages of semiconductors.

“We are in no situation to predict when the crunch will be resolved,” a senior official with a carmaker said.

The Cabinet Office said the chip shortage could stall the economic recovery.

Japan’s economic activities in the July-September quarter were worth about 534 trillion yen in annualized real terms.

To recover to the pre-pandemic level of 546 trillion yen, the economy would need to expand at an annualized 9.5 percent or so in the October-December period, according to calculations by Shinichiro Kobayashi, a senior researcher at Mitsubishi UFJ Research and Consulting Co.

A report released Nov. 10 on the average growth rate predicted by private-sector economists said the Japanese economy would grow as much as 4.93 percent in real terms in the October-December period.

Kobayashi, however, warned that despite the rosy predictions, it would still be nearly impossible for the government to achieve a rebound of the scale that it has hoped for.

The government’s outlook on economic growth serves as a basis for estimated tax revenues that will enter the national coffer.

If the outlook is off the mark, the government’ job of managing fiscal affairs would be much more difficult, given the unprecedented scale of spending to aid businesses and people struggling to keep afloat in the pandemic.

At a news conference on Nov. 15, Daishiro Yamagiwa, minister in charge of economic rebirth, emphasized the need to formulate sizable measures to shore up the economy

“The pace of recovery is slowing, and we need to act to underpin the economy,” he said, adding that the government will approve a new economic package on Nov. 19.

But he denied a need to downgrade the government’s forecast for gross domestic product for October-December quarter.