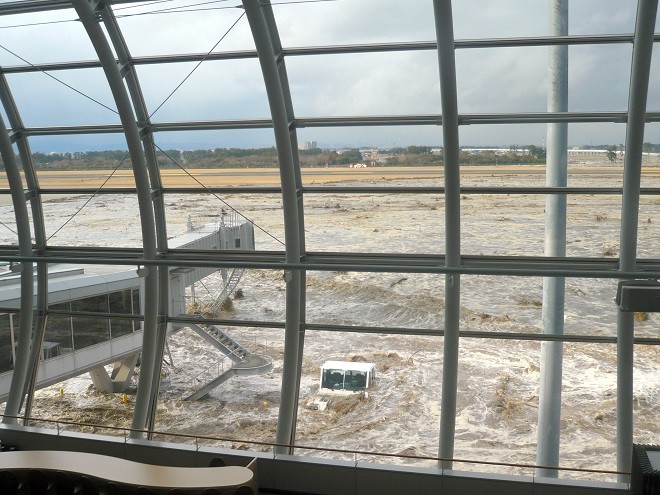 The runway is engulfed by a tsunami on March 11, 2011, at Sendai Airport. (Provided by Sendai International Airport Co.)

If he could see his future in the stars, Michael Mendillo would have departed Japan for his hometown long before the fateful day of March 11, 2011.

But Mendillo, a prominent astronomy professor at Boston University who was visiting the Tohoku region, found himself in the wrong place at the wrong time.

Mendillo, now 77, who researches the atmospheres of Mercury, Mars and Jupiter, had attended a planetary science symposium at Tohoku University from March 8 through March 11, 2011.

He then went to nearby Sendai Airport, which straddles Natori and Iwanuma in Miyagi Prefecture, for his return flight to the United States.

As Mendillo had some time to kill before his 4 p.m. flight to Narita Airport, near Tokyo, he worked on a paper about the Martian ionosphere on his laptop at a coffee shop on the third floor of the terminal.

Suddenly, the structure’s large ceiling began creaking and sparking. The massive tremor, which made it difficult to remain standing, continued for so prolonged a period that Mendillo feared steel pieces might fall on him.

“I did not plan on dying today!” Mendillo recalls shouting several times.

That night, Mendillo was invited to dinner at the home of a longtime friend, a college professor, where he heard about a massive temblor expected to occur within 30 years off Miyagi Prefecture.

On the morning of March 10, Mendillo also felt his hotel room on the 17th floor shake due to an aftershock. Following the scare, Mendillo decided he could not stay in such a risky place any longer and would depart earlier than initially scheduled.

Still, he had never imagined a magnitude 9.0-quake would occur on the day of his departure.

As a warning was issued for evacuees only in Japanese at the airport, Mendillo went out of the building and heard a man speak to him. The man said he worked for an airline company and said in English that a 30-foot high tsunami would strike soon.

As soon as Mendillo came back inside, a wall of water swamped the runway. People ran to the third story of the terminal. They did not push or shove one another aside, but simply kept shooting photos while holding their cellphones above their heads.

Left within the airport facility surrounded by the tsunami were 1,695 tourists, residents, staffers and others. The professor was the only American there.

Yoshinori Izumi, 74, and his wife, Eiko, 73, spoke to a panicky Mendillo in the wake of the earthquake.

Yoshinori, called Yoshi for short, is a ceramist from Kyoto, and the pair were visiting the local Naruko Onsen spa resort through a group tour. Eiko said she had studied as a student in the United States.

In the shivering cold at night in the terminal, people wrapped their bodies in bubble cushioning and covered their faces with masks to keep themselves warm while lying everywhere on the floor.

Light from mobile phones could be seen at some spots in the darkness. The scene appeared as if out of a sci-fi movie.

Though “senbei” crackers and “sasa kamaboko” fish cakes were distributed, Mendillo couldn’t eat the seafood product, which was unfamiliar to him, and exchanged it with Eiko for something he could consume.

Mendillo asked airport staff to allow him to contact the United States on multiple occasions but found the phone line inoperative.

Everyone in the building was kind to Mendillo. Seeing the older foreign man and asking “are you OK,” they bowed to Mendillo and offered to assist him.

When Mendillo saw some cash seemingly left on a store’s counter in payment for goods there, he thought that was a result of Japanese citizens’ virtue.

A young man told Mendillo that the “Japanese army,” or the Self-Defense Forces, would come to the rescue with a helicopter. He wondered what his late father, who had built vessels for the U.S. Navy, would have thought of that.

A bus arranged by the Iwanuma city government arrived there when the floodwaters started receding on the afternoon of March 13, allowing Mendillo and others to leave the airport after some 50 hours.

As Mendillo prepared to hitch a ride from Iwanuma Station to Sendai at the couple’s suggestion, Yoshi provided a cardboard sign saying, “I’m an American, help me” in large Japanese characters for him.

The professor decided to accompany Yoshi and Eiko halfway with other tour members returning to the Kansai region in western Japan. Spending three days with the Izumis greatly encouraged Mendillo.

Arriving at a hotel in the Tendo Onsen resort area in neighboring Yamagata Prefecture, Mendillo finally succeeded in getting through on a call to Boston.

Hearing Mendillo’s voice, his wife, Carol-Marie, said, “I knew you would call.”

As time passed, the professor realized how fortunate he was in the aftermath of the disaster.

He watched a succession of news reports about what was transpiring in the battered Tohoku region, making him aware that the devastation he had seen from the bus leaving the airport affected a far wider coastal area along the Pacific.

Mendillo also learned that many people would never be reunited with their loved ones, who were either killed or missing in the disaster.

Asked by a Japanese reporter 10 years later whether the experience changed his life, Mendillo told of a lesson he learned from the earthquake and tsunami.

“Surviving a natural disaster makes one appreciative of how special life and loved ones are,” Mendillo answered in an email response.

Apparently inspired by the phrase “que sera sera (whatever will be, will be)” that Eiko repeated at the airport, he continued, “I went on living--hopefully a bit better--with appreciation for all the special people in my life.”