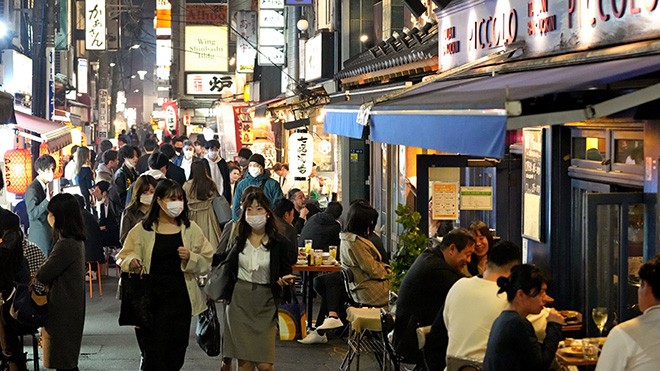 The streets of Tokyo’s Shinbashi district, known as a nightlife heaven for businessmen, are bustling on the evening of Nov. 5. (Tsubasa Setoguchi)

Tokyo confirmed seven new cases of COVID-19 on Nov. 15, setting another record low for this year.

No new infections were reported in Okinawa Prefecture for the first time in about 16 months.

Tokyo’s latest tally was down 11 from a week ago and dipped below 10 for the first time since Nov. 1, when nine cases were confirmed.

The seven new cases brought the daily average of new infections in the capital over the week through Nov. 15 to 23, or 107.5 percent of the figure for the preceding week. It marked the seventh straight day the average increased from a week earlier.

The number of serious cases in the capital requiring ventilators or extracorporeal membrane oxygenation, also known as an ECMO lung bypass machine, remained unchanged for three consecutive days at 10.