VOX POPULI: Volcano eruption reminds us of the threats lurking under the sea 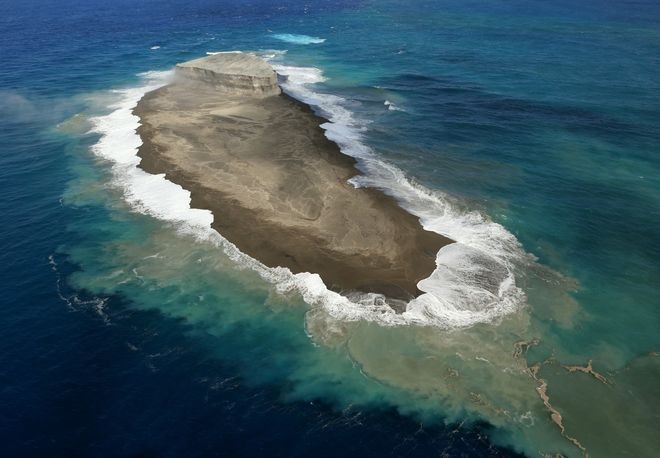 There's no end in sight to the ongoing "pumice disaster" along the nation's Pacific coast.

The source of the volcanic rock debris is believed to be Fukutoku-Okanoba, an undersea active volcano in the Ogasawara island chain. I observed it last week from an Asahi Shimbun airplane.

Located about 1,300 kilometers south of Tokyo's Haneda Airport, the volcano looked disarmingly fragile from up in the air.

Decidedly small, it reminded me of a croissant with a dab of butter on it.

Right after the eruption this past summer, it was shaped like the letter U. But it soon split into two parts, transforming into something that looked like a parenthesis.

The right half of the parenthesis has since become submerged and all that was left last week was the "croissant."

Numerous brown streaks could be observed on the sea surface. They were the pumice spewed by the volcano. Some of the broader streaks formed belts, while the narrower ones were string-like.

From there, a massive volume of pumice has kept spreading, obstructing fishing vessels from leaving ports and undermining "mozuku" edible seaweed farming.

On my way back to Tokyo, I also saw Nishinoshima island in the Ogasawara chain. The pungent smell of sulfur assailed my nostrils. White smoke kept billowing out of a crater, and I felt as if I was looking at a chimney discharging heat from the depths of the Earth.

Mount Taｍbora in Indonesia is said to have caused the most violent volcanic eruption in recorded history. It occurred in the early 19th century, killing tens of thousands of people and lowering the average temperature of the Northern Hemisphere.

And Japan's Mount Asama wrought havoc in the late Edo Period (1603-1867) with its lethal pyroclastic flow that caused crop failure.

Japan has as many as 111 active volcanoes, including Mount Fuji, Mount Aso and Fukutoku-Okanoba.

The latter is pounded by rough waves and looks hardly capable of surviving this year. However, under the sea soars a colossal volcano called Kita-Fukutoku Caldera and nobody knows when it will erupt.

I admonished myself for my tendency to focus my attention only to what happens above the sea.