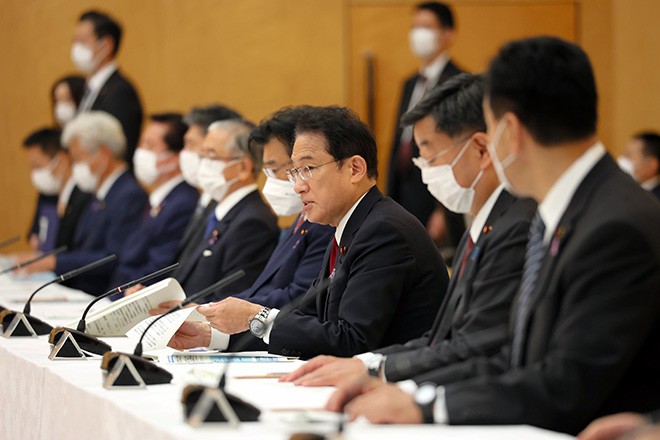 The government recently unveiled the entirety of its new plan to respond to a possible next wave of infections with the new coronavirus.

The plan calls for enhancing the ability of the nation’s health care system to treat COVID-19 patients.

The plan stipulates that if a resurgence of cases strains the system and makes it difficult to provide proper care for patients with other diseases, the government should act swiftly and reinstate tight restrictions on economic and social activities while urging the public to comply with the rules.

The document is in line with Prime Minister Fumio Kishida’s pledge to ensure “crisis management to prepare for a worst-case scenario.”

The Kishida administration must avoid repeating the mistake committed by the government of his predecessor, which took actions based on unfounded optimism and left many COVID-19 patients to die at home as they could not be admitted to the hospital.

The government needs to demonstrate its strong commitment to the plan as part of all-out efforts to fulfill its political mandate to protect the lives of the people.

Under the new plan, hospital beds for 37,000 COVID-19 patients will be set aside by the end of November, up around 30 percent from the summer peak. The number of beds available and occupied at each medical institution will be published every month.

The experiences with the pandemic so far show beds available do not count unless there are sufficient health care workers.

It is vital to maintain constant and effective communication between prefectural administrations and medical institutions over how they should work together for quick and effective responses to a new wave of infections.

In the event a regional health care system is in danger of being overwhelmed, the national government will use its authority to deploy health care workers across prefectural borders to where they are needed.

This measure requires repeated simulations on how the players involved should act under various circumstances to prevent glitches and difficulties in the actual implementation.

The new testing policy has two main objectives. One is testing to make it easier for people who cannot receive vaccinations due to health or other reasons to take part in social and economic activities, while the other is finding asymptomatic cases when the number of infections is growing.

Details of the testing regime have yet to be worked out.

There has been debate on both the purposes and scale of PCR testing since the early stages of the pandemic. Some local governments rolled out their own testing programs.

Antibody testing kits for quick diagnosis of COVID-19 were made available at drug stores in September. It is, however, not quite clear how they should be used. The government needs to establish clear guidelines and principles for testing.

The administration of vaccine boosters will start with elderly people in January following the distribution to health care workers. The booster program will be expanded to other groups in the following months.

As is the case with the initial vaccination program, municipal governments will be responsible for such operations for booster shots as securing sites and manpower and handling reservations.

The government initially planned to give booster shots to fully vaccinated people eight months or later after their second vaccine dose. But the health ministry on Nov. 15 said boosters can also be given six months after the second shot.

This change may require some local administrations to revise their booster plans. The national government should establish booster supply schedules and communicate them to municipalities as soon as possible to prevent the kind of confusion that plagued the original vaccine rollout.

In the United States, children younger than 12 have started being vaccinated. What should Japan do? This is another issue that is of great public interest.

The Kishida administration needs to dispel doubt and anxiety among citizens by providing information in a timely and accessible manner.