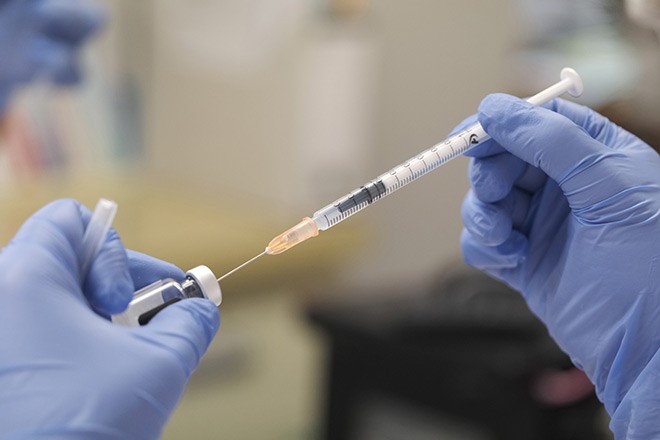 A vaccine against the novel coronavirus (Asahi Shimbun file photo)

A health ministry panel on Nov. 15 approved the use of Pfizer Inc. booster shots for people inoculated with different COVID-19 vaccines and shortened the required time between the second and third shots.

The expert panel on anti-pandemic measures also agreed on a December start for the booster shot program, which will initially target people aged 18 or older.

People who were fully vaccinated at least eight months earlier can basically receive the third jabs.

But the expert panel decided that people who received the second shots six months earlier can take the booster shots at the discretion of their municipal governments, depending on the local infection situation.

The health ministry on Nov. 11 gave special approval to domestic production and sales of Pfizer vaccines for the booster shots. It requires the window of at least six months between the second and third jabs, based on such cases abroad.

The age limit of 18 or older was set based on clinical trial data submitted by Pfizer for the approval.

The Pfizer vaccine will be used for the booster shots for the time being. The third jabs will eventually be available to everybody who is fully vaccinated, according to the health ministry.

The health ministry does not prioritize any group, but it recommends the third shots for elderly people, those with underlying conditions, nursing care staff and medical personnel.

The ministry will distribute the relevant information in leaflets and through other means.

People inoculated with the vaccines of Moderna Inc. or AstraZeneca Plc will be allowed to receive the Pfizer booster shot.

On Nov. 10, Moderna submitted a request to the health ministry for approval of its vaccine for the booster shots.

If approved, the expert panel will discuss the matter as early as December.

The government plans to start the use of Moderna’s vaccine before workplace vaccination programs resume in March next year.

The effectiveness of the vaccines against COVID-19 reportedly drops after the second inoculation.

The costs of booster shots will be covered by the government, like the previous jabs, under the preventive vaccination law.

Municipal governments plan to send booster shot vouchers to fully vaccinated people, starting with those who received the second jabs the earliest.