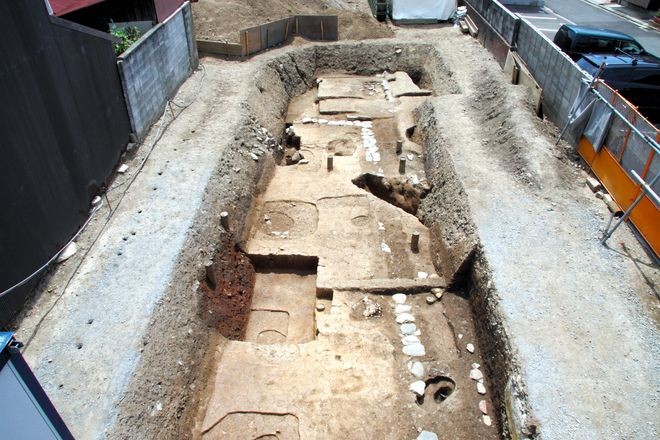 When seen from the north side, the excavation site reveals postholes (left foreground) and stones arranged to form an L-shaped rainwater ditch believed to be part of the Tokaden hall. (Provided by the Kyoto City Archaeological Research Institute)

KYOTO—Researchers here said they uncovered the apparent remains of the Dairi imperial residence of the Heiankyu palace, the locale for Heian Period (794-1185) literary classics “The Tale of Genji” and “The Pillow Book.”

According to a report on the findings by the Kyoto City Archaeological Research Institute, the excavation was carried out in 2015 in the Higashi-Shinmeicho district of Kyoto’s Kamigyo Ward, about 500 meters northwest of Nijo Castle.

The ruins are believed to be from the Tokaden and Kokiden halls, where the empress and female palace attendants stayed when Kyoto was the capital and called Heiankyo.

Five postholes that supported pillars for a building were found about 1 meter below ground running north to south and each separated by about 3 meters.

Sets of stones arranged in an L-shape to serve as ditches for rainwater from the roof were also discovered.

Based on the age of earthenware pieces uncovered at the site, researchers estimated the original building using the postholes was from the early Heian Period.

They calculated that the building stretched for about 12 meters from east to west and about 27 meters from north to south.

Traces that the pillars were pulled from the holes suggest that the structure was later reconstructed.

One of the postholes bears signs that it was dug as deep as about 1.4 meters.

The rain ditches, found in several spots across the site, are believed to have been built in the mid- and late Heian Period.

Based on data from “Daidairi-zu Kosho,” a research book on Heiankyu compiled in the Edo Period (1603-1867), the institute deduced the excavation site is located in an area stretching between where the Tokaden and Kokiden halls once stood.

The institute concluded the postholes were from the ruins of the southwestern section of Tokaden, which was built during construction of the palace.

On the south side of the postholes, the researchers unearthed what may have been two foundation stones placed side by side in the mid-Heian Period to support a north-south corridor connecting Tokaden and Kokiden.

Emperor Ichijo’s consort, Teishi, lived in Tokaden in the latter half of the 10th century. Sei Shonagon, author of “The Pillow Book,” served as a court lady to Teishi.

An entry in the book recalls how she was nervous when serving the empress consort after finishing work at dawn in the early days of her career.

“Tokaden’s garden is small because of a fence set up nearby, but the snowy landscape is really nice,” she wrote.

Another paragraph describes how Teishi’s father, Fujiwara no Michitaka, who served as “Kanpaku” (chief adviser to the emperor), and his daughter, who became a crown princess, visited Tokaden to see the consort in 995.

While Kokiden is also featured in “The Pillow Book,” it is perhaps best known as the living place of Kokiden no Nyogo, the antagonist in “The Tale of Genji” who harbors a grudge against Hikaru Genji and his mother, Kiritsubo no Koi.

The hall is also portrayed as a secret meeting place for Hikaru Genji and Oborozukiyo.

The Dairi imperial residence is believed to have existed when the capital was relocated to Heiankyo in 794.

But it has remained unclear when Tokaden and Kokiden were completed.

The two halls were burned down and rebuilt many times over the centuries. They continued to stand until the 13th century when the Dairi residence was abolished, records show.

The latest findings confirmed that Tokaden existed at the time of the capital relocation.

Hardly any traces of Dairi have been found in the entire area surrounding the excavation site because feudal warlord Toyotomi Hideyoshi (1537-1598) carried out massive civil engineering work to build a moat for his office and residence, called Jurakudai.

Few excavations have been conducted in the area because the old townscape remains there.

The site has since been backfilled, with a nursing care home now standing above it.

“This string of rare discoveries even shows the transition leading up to the late Heian Period, not to mention the fact that (the ruins of the two buildings) were found exactly where they are described in old documents. It is very surprising,” said Ryohei Nishiyama, a professor emeritus at Kyoto University specializing in ancient and medieval Japanese history.

The discovery that the structures were built using pillars buried in the ground countered previous theories that the Dairi buildings were constructed using a newer method of placing pillars on foundation stones, which would make the pillars less susceptible to decay.

Nobuya Ami, a professor of archaeology at Kindai University, said: “Emperor Kanmu, who built Heiankyo, incorporated technologies from the Chinese continent and Tang Dynasty-style culture. Meanwhile, Dairi was built with traditional methods. (The latest findings) are important pieces of information that indicate he also placed great value on tradition.”