“Takigi Noh” performances are staged in front of the Atomic Bomb Dome in Hiroshima on Nov. 15. (Jun Ueda) 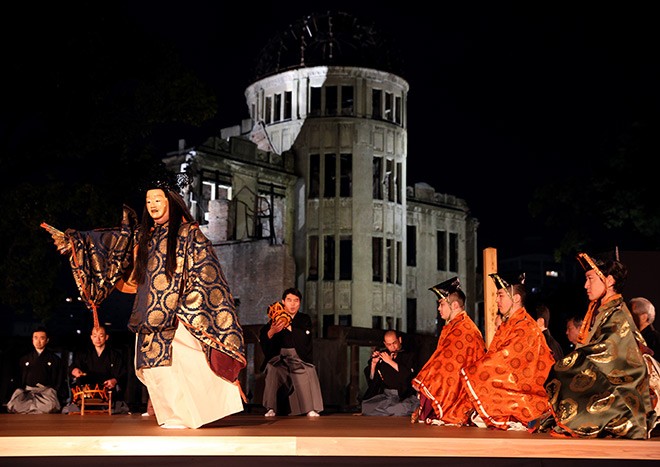 “Takigi Noh” performances are staged in front of the Atomic Bomb Dome in Hiroshima on Nov. 15. (Jun Ueda)

HIROSHIMA--Traditional Japanese Noh performances were given in front of the Atomic Bomb Dome here ahead of its 25th anniversary of UNESCO's registration as a World Heritage site in December.

The “takigi Noh” performances were staged outdoors on the evening of Nov. 15 and reflected the sounds and lives of people in the area before the atomic bombing of the city on Aug. 6, 1945.

The stage was lit by crackling bonfires to mourn those who died and to remember the local cultural tradition lost after the attack.

The event was the first of its kind organized by people who lived near the site before the bombing.

Masaaki Tanabe, 83, one of the organizers, lived next to the east side of where the Atomic Bomb Dome currently stands and lost his parents and brother in the bombing.

“I want people to imagine that residents near ground zero also had spent their daily lives just like everyone else,” said Tanabe.

The area was formerly known as the Sarugakucho and Saikumachi districts since they were home to many “nogakushi” (Noh players) and “saikushi” artisans of musical instruments during the Edo Period (1603-1867).

Before the atomic bombing, Noh songs and musical accompaniments were frequently heard in those districts even during World War II.