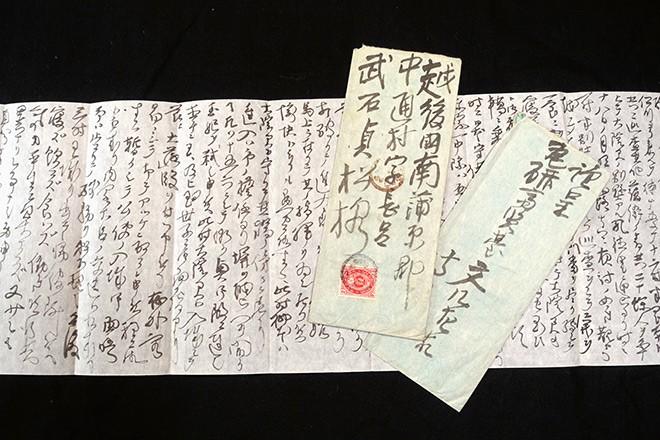 This picture shows the letter sent by Kumaichi Horiguchi to Teisho Takeishi, his best friend, on Oct. 9, 1895, the day following the assassination. The text saying “We killed the queen” is seen in the center of the photo. Among the eight letters found, only this one was sent in two envelopes. (Yasuji Nagai)

A former Japanese diplomat confessed to taking part in the 1895 assassination of Korean Empress Myeongseong, according to a Korean historian who examined recently discovered letters that provide a fresh account of the brutal slaying.

Also known as Queen Min, Myeongseong was the wife of Gojong, the 26th king of Joseon, a Korean dynastic kingdom, and was known as an influential figure in the palace.

In one of the letters, the diplomat proclaimed, “We killed the queen,” and went on to detail the circumstances surrounding the assassination.

The slaying, known as “the Eulmi Incident” in Korea, involved a group of people that included Japanese military officers, diplomats and civilians.

The group stormed Gyeongbokgung Palace in Seoul, which was the royal palace of the dynasty, early on the morning of Oct. 8, 1895, and hacked the queen to death with a sword. After killing her, they doused her body with oil and burned it.

The assassination came after the queen sought help from Russia in her attempt to remove Japanese influence from Korea after the Triple Intervention in 1895. That was a diplomatic intervention by Russia, Germany and France over the terms of the Treaty of Shimonoseki.

Japan had imposed the treaty on the Qing Dynasty of China after emerging victorious from the First Sino-Japanese War (1894-1895). But the diplomatic intervention forced Japan to return the Liaodong Peninsula to the Qing Dynasty, which it had acquired after the war, and weakened Japan’s influence in Korea.

Kumaichi Horiguchi (1865-1945), who was assistant consul in Korea, was the diplomat who wrote the eight recently unearthed letters.

He had sent the letters to Teisho Takeishi, his best friend in his hometown Nakadori (currently Nagaoka) in Niigata Prefecture, who was a scholar of Chinese classics. The letters are dated from Nov. 17, 1894, to Oct. 18, 1895--soon after the assassination.

Steve Hasegawa, a Nagoya-based expert on stamps, obtained the letters at an antique market.

Kim Moon-ja, a historian and the author of a book on the assassination, "Chosen Ohi Satsugai to Nihon-jin" (The killing of the Korean queen and the Japanese), analyzed the letters.

Horiguchi was identified as the author based on a number of factors, including the location in which the letters were originally kept, their contents, the postmarks and how the envelopes were made.

The sixth letter among the eight, dated Oct. 9, 1895, the day after the assassination, details what Horiguchi did on the day of the killing.

He revealed that the group of assailants stormed the rear part of the palace and murdered the queen.

“(Among the assassins), it was my role to enter,” the letter read. “Climbing up the wall … finally reaching the rear private royal residence, we killed the queen.”

He even described how he felt afterward.

“We were stunned as it (the assassination) was unexpectedly easy.”

The letters were written with a brush in a cursive style, using the traditional forms of Chinese characters (Kyujitai), as well as Japanese hiragana and katakana characters.

Kim said he believes the letters to be authentic.

“The details of the assassination and the accounts of his family in the letters convinced me that they are genuine letters written by Horiguchi,” he said.

“I got a raw feeling of shock reading that the then-incumbent diplomat was involved in the killing of the queen of the country to which he was sent. These are important documents that give us a key to unlocking the details behind the incident, of which much is still unknown.”

The letters written just prior to and after the assassination contradict other accounts of the incident given by people associated with it in later years.

It is believed that the assassins had planned to storm the palace, pretending to be protecting it and its most important people, under the guise of a fake “pro-Japan coup” led by Heungseon Daewongun, Gojong’s father. But in reality, they intended to kill the queen.

Horiguchi is believed to have been responsible for persuading the Daewongun to come to the palace from his residence, located in a suburb of Seoul, prior to the assassination.

The fifth of the eight letters is dated Oct. 7, 1895, the day before the assassination. In it, Horiguchi spoke of Chinese poems that the Daewongun had given him.

“I have visited Heungseon Daewongun, and we exchanged poems and prose many times over the past few days,” it said.

He described Daewongun's poems as being “unclear and incomprehensible.”

He also praised the Daewongun, saying he is “the best old hero of Korea and someone you can talk to,” and added that he is “funny and refined, a sly old man you somehow can’t describe.”

He also hinted about the upcoming incident by writing that a “huge disturbance might occur soon.”

While the passage addressing the Daewongun’s poems might at first seem insignificant, Kim said it is actually crucial evidence in understanding the event.

In his essays reflecting on the incident from the 1930s, about 40 years after the assassination, Horiguchi made public three Chinese poems written by the Daewongun and alleged that the Daewongun had confessed his will to launch a coup.

“However, the Daewongun’s Chinese poems, as shown in the recently uncovered letters written by Horiguchi, paint an entirely different picture,” Kim said. “People associated with the assassination, including Horiguchi, insisted after the incident that the Daewongun was the ringleader of the killing. These letters are important evidence in proving that their story was fiction.”

On Oct. 11, two days after he wrote the sixth letter, he also reported the incident to Takashi Hara, the then-vice minister of foreign affairs who would later become prime minister, in a private letter at the behest of his superior.

But while Horiguchi wrote that he had witnessed the killing and admitted to taking the Daewongun out of his residence with others, he only said that “the queen died” regarding the assassination, as if he were just a passive observer.

Previous research has also pointed to Horiguchi being one of the assailants, but it is still unknown just who attacked and murdered the queen with the weapon.

Sadatsuchi Uchida, the then-first consul in Korea, who was not informed of the assassination plan beforehand and dealt with its aftermath, said that a “certain lieutenant of the Imperial Japanese Army” had killed the queen in his letter sent to Hara on the day of the assassination.

Others have also been described as being responsible for killing the queen.

The assassins are thought to have planned to leave the palace before dawn, after the murder. But they instead committed the crime after dawn because the Daewongun was reluctant to leave his residence to come to the palace, and because the assassins, who were divided into two groups, failed to assemble at the proper time.

Because of the disorganization, many people witnessed the assassins leaving the place after the murder, which meant it was clear that Japanese were involved. But Horiguchi’s letters made no mention of this blunder.

“There are many memoirs written by Japanese who were involved in the assassination, but they contain both facts and fiction, with a lot of exaggeration,” Kim said.

“However, the accounts in Horiguchi’s newly discovered letters, although needing more study, are thought to be more trustworthy because they are private letters sent to his best friend in his hometown whom he trusted.”