EDITORIAL: Toshiba’s value to society will be tested by split into 3 entities 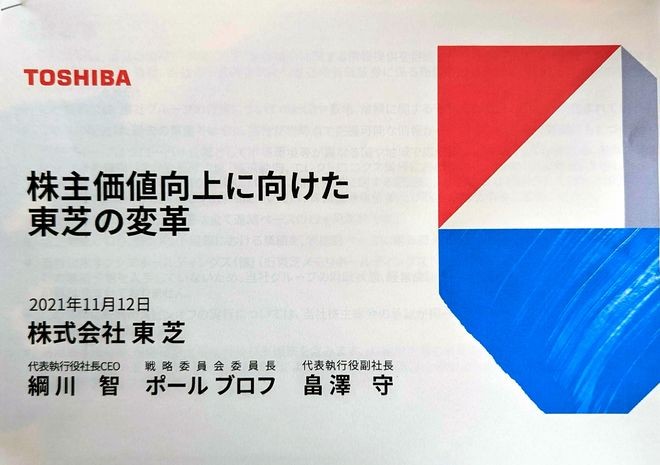 Toshiba Corp. is taking down its "comprehensive electronics manufacturer" shop sign, so to speak.

The industry giant intends to make a fresh start by splitting itself into three companies, each specializing in the areas represented by the departments from which they are being formed.

But the crucial question is whether Toshiba will be capable of providing value to society through its products, services and employment. Along with rebuilding its corporate governance structure, Toshiba is about to face its toughest challenge.

According to a plan announced last week, the three companies will be as follows: One company will handle nuclear power generation and other infrastructure-related businesses; another company will specialize in semiconductor chip and memory device businesses; and a third will deal with asset management.

Toshiba claims the benefits of this plan include clarifying their corporate values and speeding up actions in management-related matters by focusing on specialized business areas.

After years of diversifying its areas of operation, Toshiba switched to a "selection and concentration" policy after the collapse of the asset-inflated bubble economy in the early 1990s and started focusing on nuclear power generation and semiconductor chip businesses.

And after incurring massive losses in the wake of an accounting fraud and failed nuclear power generation deals, the company was forced to sell some of its business divisions.

The decision to break itself up into three companies could be considered a corollary to those developments.

The split does have certain merits. But it also poses the risk of dissipation of the value of Toshiba's technology, human resources and brand name, all of which have been built over many years.

The new plan was put together under the guidance of external board members and others, who emphasized exchanges of opinions among diverse shareholders to ensure a generous return policy for them.

The planners also say all stakeholders will benefit from the decision. However, their explanation of benefits to Toshiba's customers and employees and local communities comes across only as a facile generalization.

Toshiba's heavy reliance on overseas investment funds to cover its massive losses has raised the proportion of "activist shareholders."

An investigation was demanded by shareholders over how last year's shareholders' meeting was conducted, and a report compiled in June concluded that the meeting "could not be said to have been conducted fairly."

This resulted in the departure of two executive officers and the refusal by shareholders to reappoint two board members.

A report by the Governance Enhancement Committee, issued simultaneously with the company breakup plan, noted that Toshiba's then-CEO and other executives behaved unethically but not illegally.

However, the report concluded that they still raised suspicions about the fairness and transparency of their attitude toward shareholders, which, in itself, ran up against corporate ethics.

Given the background, we believe Toshiba has no choice but to heed the voices of its shareholders, at least to some extent.

But according to the thinking of the supremacy of "shareholder value," no corporation can remain as a member of society. For a company to maintain a constructive relationship with shareholders, the meaning of the company's existence must be understood by many people concerned.

With respect to last year's shareholders' meeting, Toshiba and the Ministry of Economy, Trade and Industry remained in close consultation, and it was pointed out that METI leaked information about overseas investors to Toshiba.

Last week's report denied any violation of secrecy laws, but also pointed out that METI's disclosure to Toshiba of information that is normally not expected to be released represented a "too close" relationship that went against corporate ethics and caused the loss of trust of shareholders.

The report also contained facts and background, the accuracy of which have yet to be verified.

Even though METI stresses Toshiba's importance as a company deeply involved in national security, that is no excuse for ignoring accountability. The ministry must understand the necessity of administrative transparency.