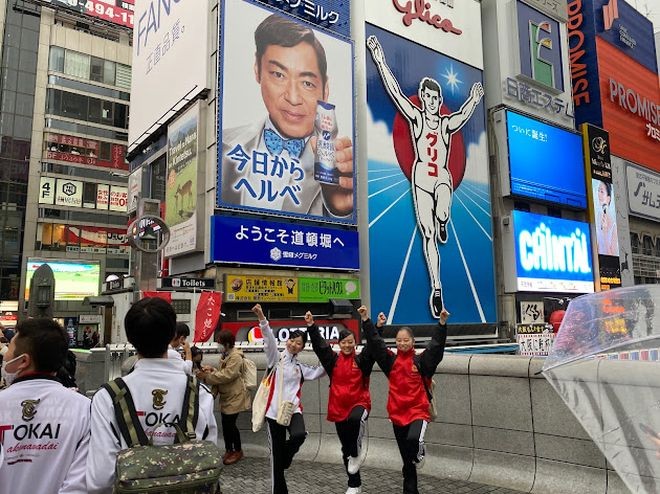 People pose for a photo in the middle of Ebisubashi bridge, holding their hands up to mimic the Glico Man sign behind them. (Photo by Lisa Vogt)

Perhaps the most photographed and recognizable neon signage in Japan is the Glico Man, an image of a runner crossing a finish line with both arms raised, seen from Ebisubashi bridge at Dotonbori in Osaka.

The brilliance of using the sprinter is that he conjures up the company's caramel sweet catchphrase, "Three hundred meters on a single piece," which suggests that those who eat one can run that distance.

Why 300 meters? The distance matches the sweet's number of calories.

Riichi Ezaki (1882-1980), the founder of Glico, believed that nourishment and play were essential for a wholesome childhood. With this conviction, he added glycogen extracted from oysters to caramel and started selling in 1922 what we’d call today an energy product.

He sold it in a snappy red box that came with a little toy.

Dotonbori refers to a canal, a street that runs parallel to it, and the general entertainment district in the heart of Osaka. Its history dates back to 1612 when Yasui Doton (1533-1615) and his partners started construction of the canal.

Unfortunately, Doton was killed in the Siege of Osaka, where the Tokugawa Shogunate put an end to the Toyotomi clan. Although he died before it was finished, the canal was given his name upon its completion in 1615.

The waterway became a popular and lucrative trade route, and the government designated Dotonbori as an entertainment district, which soon boasted several Kabuki and Ningyo-Joruri puppet theaters.

Eateries and drinking holes sprang up, and theater-goers and party people poured into the area. Today, it’s a place to eat, shop and be entertained till you drop.

Unlike their Kyoto and Tokyo compatriots, Osaka people are not known for restraint, especially when it comes to their local baseball team, the Hanshin Tigers. In 1985, when their favorite team won the Japan Series, fans went wild and jumped into the Dotonbori canal.

Then they got carried away, and a statue of the founder of Kentucky Fried Chicken, too, literally got carried away and thrown into the canal. After this, the team did not win again for 18 years, which became known as “The Curse of Colonel Sanders.”

No trip to Dotonbori is complete without eating signature Osaka food such as "okonomiyaki" cabbage pancakes, "takoyaki" octopus balls and "kushi-katsu" kebabs.

Each time I’m in Dotonbori and look up at the Glico sprinter, I am reminded that nourishment and play are the key to a good life for kids--and all of us. Permission is granted to indulge in "kuidaore" (ruining oneself with extravagant food) and "asobi" (playing) to one’s heart’s content.

This article by Lisa Vogt, a Washington-born and Tokyo-based photographer, originally appeared in the Oct. 31 issue of Asahi Weekly. It is part of the series "Lisa’s Wanderings Around Japan," which depicts various places across the country through the perspective of the author, a professor at Meiji University.