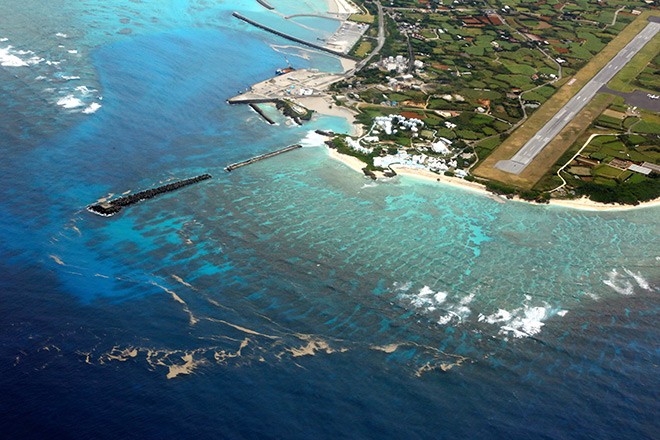 Pumice drifts around the shore of Yoronjima island in Kagoshima Prefecture on Nov. 13. (Provided by the 10th Regional Coast Guard Headquarters)

Pumice stones spewed from an undersea volcano that have fouled coasts in Okinawa Prefecture have apparently made a U-turn and could reach the Izu island chain within days, a research institute’s upgraded analysis showed.

The Japan Agency for Marine-Earth Science and Technology (JAMSTEC) said Nov. 16 that its latest computer simulation indicated that the floating volcanic stones will first pass along the coasts of the Tokai and Kanto regions.

The stones are then expected to start closing in on the Izu island chain, including Miyakejima island, located 180 kilometers south of central Tokyo, around Nov. 18, remain there for a while, and move out to the sea late in the month, according to the simulation.

JAMSTEC, based in Yokosuka, Kanagawa Prefecture, predicted that the coastlines of the main island of Honshu would be spared from getting hit by large amounts of pumice, but the stones will create a hazard for vessels and other watercraft.

JAMSTEC’s analysis was based on information on the stones’ locations provided by satellites of the Japan Aerospace Exploration Agency. Its past analyses were based on data on ocean currents.

“This time our simulation is more accurate, but there could be pumice that satellites cannot detect,” said Toru Miyama, a senior JAMSTEC scientist who is an expert in physical oceanography and conducted the analysis. “We don’t know how much pumice could approach the Izu island chain.”

He urged people aboard ships to be on guard against pumice stones that could be sucked into their engines.

“We also need measures to prevent the pumice from entering ports,” he added.

The massive amounts of pumice originated from the eruption in August of the Fukutoku-Okanoba underwater volcano in the Ogasawara island chain around 1,300 km south of central Tokyo.

By October, the stones had drifted 1,400 km to Okinawa Prefecture, creating gray carpets on the sea surface that have plagued the fishing, tourism and other industries there.

JAMSTEC’s latest analysis observed conditions in the Pacific Ocean and the seas surrounding Okinawa Prefecture. It also took into account for the first time the impact from wind and tide for its predictions of the movement of the pumice for the period from early November to early December.

For the Pacific Ocean prediction, JAMSTEC focused on movements of the stones off the coast of Kochi Prefecture on the main island of Shikoku on Nov. 4.

Okinawa Prefecture is still dealing with the damage caused by the pumice.

Although the stones will likely be carried by the Kuroshio Current, strong north winds could keep the pumice west or north of Okinawa’s main island.

The latest simulation can be viewed on JAMSTEC’s Japanese website at: (http://www.jamstec.go.jp/j/)