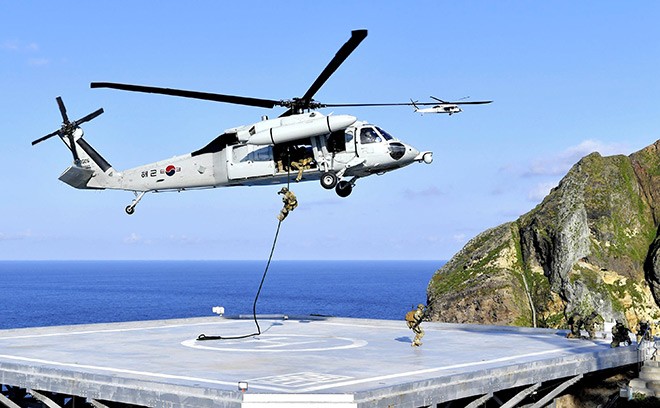 A member of the South Korean Navy’s special unit lands on the Takeshima islets from a helicopter as part of training in August 2019. (Provided by the Republic of Korea Navy)

A visit by South Korea’s head of police to the Takeshima islets, claimed by both Tokyo and Seoul, was condemned by Japan’s chief Cabinet secretary on Nov. 17.

“We cannot accept this at all and regard it as extremely unfortunate, considering that they are clearly an inherent part of Japan’s territory in view of historical facts and international laws,” Hirokazu Matsuno said at a news conference.

According to South Korean police sources, Kim Chang-yong, commissioner-general of South Korea’s National Police Agency, landed on the islets in the Sea of Japan on Nov. 16.

“We made a request to immediately cancel the plan to land on the islets on Nov. 15 after the media reported on it and also lodged a strong protest on Nov. 16,” he said.

South Korean media have reported that this is the first time in 12 years that an incumbent commissioner-general of the National Police Agency landed on the Takeshima islets.

“As a country, based on Japan’s coherent stance on various issues, including the one on the Takeshima islets, we will continue strongly demanding that South Korea take appropriate actions,” Matsuno said.

He said it is believed that Kim landed on the islets, but that the government has not received confirmation of the visit from the South Korean government.