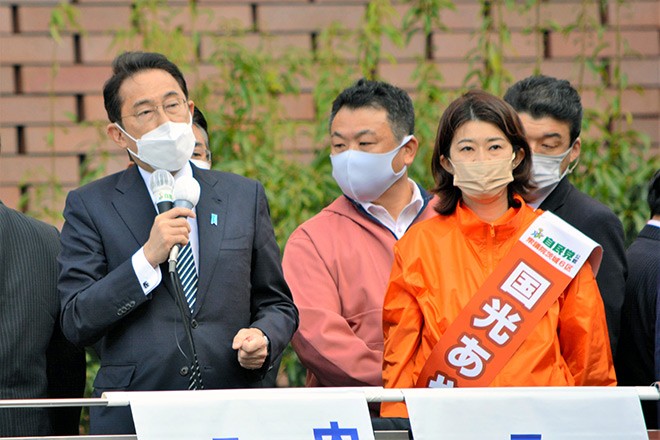 MITO--A lobby group affiliated with the Ibaraki Trucking Association doled out 5,000 yen ($44) to members who attended a campaign speech given by Prime Minister Fumio Kishida in the recent Lower House election.

An association official described the money as a “transportation allowance” and argued there was nothing illegal about it because no one was asked to vote for any particular candidate.

However, an expert pointed out it was inappropriate in the spirit of the Public Offices Election Law because payments like these give an unfair advantage to groups flush with cash to hand out.

“We felt we had to pay something because we were asking participants to set aside a few hours of their time” to listen to the speech, one officer said.

The payments were made for attending a speech Kishida delivered on Oct. 26 in Tsukuba while stumping for Ayano Kunimitsu, the ruling Liberal Democratic Party’s candidate in the Ibaraki No. 6 district.

Four days earlier, the policy research group sent a fax to the heads of three local branches of the Ibaraki Trucking Association informing them of Kishida’s upcoming speech. The document also said the association would pay 5,000 yen to any member who attended the speech.

The Ibaraki Trucking Association has about 1,600 member companies.

An official serving with both groups admitted that the fax was sent and that 5,000 yen was paid to 21 members who actually came to hear the speech.

Another seven people were also given 5,000 yen for attending two other campaign speeches, one of which was given by former Prime Minister Shinzo Abe on Oct. 27.

The money came from the membership fee revenues of the policy research group.

The official explained that the two groups often lobby Diet members on policy matters such as lowering expressway fees.

“It will be difficult to visit lawmakers and ask for their help if we only make these kinds of requests without helping them out in other ways,” the official said.

The president of a transportation company admitted to receiving the cash after attending Kishida's speech.

“I accepted it as a commuting expense,” the company president said. “We always receive these kinds of payments when we attended association gatherings. I was never told to vote for someone.”

Both Kunimitsu’s office and the LDP Ibaraki prefectural chapter declined to comment on the payments.

Tomoaki Iwai, a lecturer on political science at Nihon University, said the payments were not illegal because they were made by the research group, not the candidate.

But Iwai said the payments went against the spirit of the Public Offices Election Law, which is designed to not create any advantage among candidates due to their financial position or the deep pockets of the groups that support them.