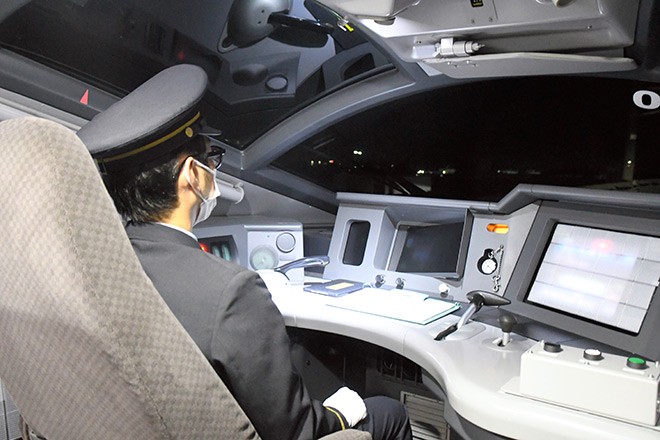 A driver is aboard an E7-series Shinkansen bullet train during a self-driving test run in Niigata on Nov. 17. (Toshinari Takahashi)

NIIGATA--Without a human driver at the controls, a Shinkansen bullet train began pulling out of the deadly quiet JR Niigata Station at 1:50 a.m. on Nov. 17 and soon reached a speed of 100 kph.

But not to worry.

The test involving the E7 series was a first for the railway operator. It was the 11th experiment involving a self-driving Shinkansen since late October.

The company is conducting the test runs in the hopes of running automated trains reaching 200 kph in the future.

But he noted a host of challenges facing JR East in the operation of driverless trains.

“We need to continue to work on how to make a smooth stop at a station,” he said. “There still is room for improvement.”

According to JR East, a driver operates an existing bullet train by controlling a lever for acceleration and brake actuation while monitoring signals and a speed limit shown on the driver’s platform.

The train is equipped with an automatic train control (ATC) system, which actuates the brakes automatically when the train exceeds the speed limit and when an emergency stop button is pushed at a station.

In the test on Nov. 17, the ATC was combined with the automatic train operation (ATO) device, which enhances safety to help automate the operation of trains.

The ATO can be controlled automatically based on the input of the service planning diagram.

After the E7 train cruised on an elevated track, it began slowing as it neared the Niigata Shinkansen Rolling Stock Center, about 5 kilometers from JR Niigata Station.

It stopped precisely at the spot it was supposed to. JR East officials give a passing grade if the difference is within a range of 50 centimeters.

Acceleration and deceleration were both smooth during the ride.

During the test run, JR East also checked whether footage taken by a camera installed on the driver’s platform and elsewhere can be transmitted live to the train operations center.

The experiment is designed to allow railway staff to grasp circumstances in an instant in the event a driverless train is involved in an accident.