Help is out there, says hospital behind ‘baby hatch’ system 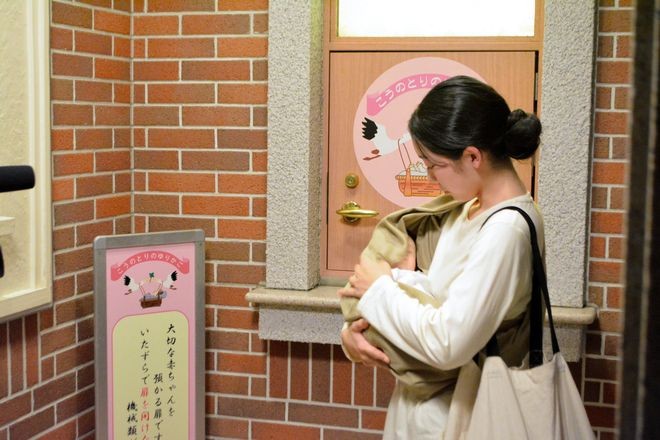 KUMAMOTO--The underage mother stands outside the hushed Jikei Hospital here one chilly evening and gives the infant cradled in her arms a final studious look before dropping it off anonymously in the baby hatch, content in the knowledge that her child will at least receive the quality care she is unable to provide.

The Oct. 9 scene was captured for a promotional movie featuring a young woman who has an unexpected pregnancy, gives birth alone and takes a Shinkansen high-speed train from her home, followed by a bus journey, to reach the hospital where she knows she can get rid of the child with no questions asked.

Inspired by a true story, the footage was shot by an ad agency and lasts for five and a half minutes. Sora Hirose, a 17-year-old model, plays the role of the mother while actor Megumi Ushijima, 37, is a nurse in the clip.

The promotional video is the brainchild of the Jikei Hospital, which pioneered the baby hatch system called the “cradle of storks,” in the hope it will stop new mothers from abandoning or killing unwanted newborns.

The project also aims to raise public awareness about unwanted pregnancies and the hospital’s system that allows parents facing difficulties raising children to drop off their offspring anonymously. An added benefit is that Jikei Hospital hopes it can lift its own profile more than a decade after it introduced the controversial drop-off hatch.

Before shooting the video, Hirose and Ushijima prepared for their roles by visiting Jikei Hospital to listen to accounts by nurses and other staff members responsible for consultation phone calls from troubled parents.

Takeshi Hasuda, who heads Jikei Hospital, said he thought it was vital that the views of hospital staff were reflected in the clip as he explained the circumstances that led to the hospital accepting unwanted infants.

“As leaving one’s own baby behind anonymously at the cradle is an extraordinary experience, the reproduced scene could have come across as meaningless unless the voices of those working here were taken into account,” said Hasuda, 55.

The finished movie is to be uploaded to the hospital’s website and YouTube. An English-subtitled version is also in the works to help publicize the facility’s efforts outside Japan.

The central message of the video is to “stop infants from being abandoned or killed” and show that women with unwanted pregnancies have an option if they are unable to care for their newborns, Hasuda said.

Jikei Hospital initiated the baby hatch project in 2007, drawing a sharp reaction, much of it critical.

However, the hospital remains adamant in its quest to keep accepting unwanted infants, particularly as far fewer women in their teens to 20s now know about the existence of the baby box system.

The promotional video is also aimed at those who are critical of the system.

Hasuda explained that he believes broad public debate and support is essential for the relatively small medical center to continue with its efforts.

“Mothers are desperately risking their lives to visit us,” Hasuda said. “They, of course, have affection for their offspring. I hope people will become aware that these mothers arrive here after giving the matter much thought.”

Hasuda explained that parents at times give up on their children when the mothers themselves had been abused by their parents and cannot talk about their personal problems with family members. Some cases involve such things as developmental disability, mental retardation and psychological disorders.

Hasuda recently got involved in learning more about legal issues stemming from abandoning an infant to outright infanticide.

About five years ago, he began attending trials that involved young mothers who “did not entrust their children to our cradle before committing crimes.” Hasuda believes that learning about such incidents will help him spur public discussion on the issue.

“Presenting actual instances where babies died or were disposed of will surely lead people to talk about what steps should be taken to deal with this reality,” Hasuda said.

He also keeps a close watch on news reports for possible cases involving unwanted newborns, and sends letters to local bar associations and other parties to interview defendants and submit his opinions before the cases go to trial.

In one such instance, Hasuda heard of a mother who gave birth alone say she had no memory of before and after her delivery. The woman was given the third degree in court over the veracity of her account.

Citing his background as a medical doctor, Hasuda said losing one’s memory in such a case is possible. He remains determined to do what he can to help raise social understanding concerning desperate women who feel they have no choice but to give birth in isolation.

Jikei Hospital operates not only the baby box but also a consultation counter for people in need of help that is open around the clock. A specialized section is also in place to provide advice to women suffering from issues such as domestic violence.

Jikei Hospital also recently went a step further by announcing it would accept women wanting to give birth to their offspring anonymously. Children can be informed of their origins after they reach adulthood under the anonymous birth program.

Hasuda said this approach, combined with his knowledge accumulated through a thorough analysis of legal cases in such issues, can help to prevent the lives of children from being threatened.

He clings to the belief that unless anonymity remains a given in the three areas of consultation, delivery and entrustment of infants to safekeeping, tragic incidents cannot be prevented.

“Future efforts to rescue infants must respect the fact that some mothers, for whatever reason, insist on remaining anonymous,” he said.

Hasuda’s current goal is to ensure that similar baby hatch systems are incorporated in all of Japan’s 47 prefectures, enabling those living far from Jikei Hospital and unable to visit it to seek assistance elsewhere.

(This article was written by Rina Horikoshi and Hideki Ito.)