Okayama town recognized for its dark night skies for starwatchers 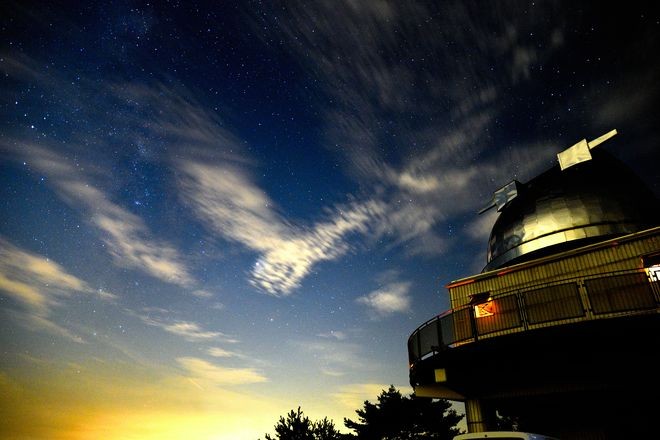 The Bisei Astronomical Observatory, right, and the magnificent starry sky are seen on Sept. 2, 2019, in the Bisei district of Ibara, Okayama Prefecture, in this image taken with an exposure time of 25 seconds. (Asahi Shimbun file photo)

IBARA, Okayama Prefecture--Instead of boasting of bright lights, trendy restaurants and packed tourist spots, the Bisei district here is basking in the glow of something increasingly rare: its pristine dark skies at night.

Residents and officials in Bisei are celebrating the district earning the status of an International Dark Sky Community for its picturesque star-lit landscape.

Billing itself as the “town of stars,” Bisei became only the third region in Japan to be recognized by the U.S. nonprofit organization International Dark-Sky Association (IDA), which is comprised primarily of astronomers.

It was reportedly the first time that a local area in Asia has been certified in the community category under the program for its area-wide efforts to preserve magnificent starry skies.

Locals in Bisei hope the designation will help the district grow in popularity as a tourist spot.

“Our community-wide endeavor was acknowledged, offering a chance for us to show off the appeal (of local skies) for both visitors and residents,” said Shota Maeno, 39, chief engineer at the Bisei Astronomical Observatory.

The International Dark Sky certification program was introduced in 2001 by the IDA.

To date, 187 spots from 21 countries, including the Iriomote-Ishigaki National Park in Okinawa Prefecture and Kozushima island off Tokyo, both of which were certified in the park section, have been designated as International Dark Sky sites in six categories.

Located on a highland at altitudes from 300 meters to 400 meters, Bisei was formed by merging four villages in 1954. Its name, which means “beautiful stars” in Japanese, was formed by taking one kanji each from two local rivers.

A legend says three shooting stars fell on what currently is Bisei in the Kamakura Period (1185-1333).

The Bisei Astronomical Observatory, with a 101-centimeter Cassegrain telescope, opened in 1993. Bisei has since enjoyed popularity as an ideal stargazing spot among astronomers and star watchers.

However, some 30 years after the ordinance’s establishment, Bisei faced difficulty continuing with its activity to protect dark skies, as more security lights were replaced with white light-emitting diodes, polluting the black skies overhead.

With that in mind, Ibara city last year initiated a program to apply for the International Dark Sky certification as part of efforts to have citizens realize that precious star-filled skies are a “treasure."

By March this year, security lights and outdoor lamps at a total of 740 locations in Bisei were replaced with new ones whose light does not brighten the sky overhead.

In autumn last year, a cooperative group of 30 entities from the authorities, industry and academia was set up under the Bisei tourism association’s initiative to discuss ways to attract sightseers after the area’s inclusion in the International Dark Sky list.

Referring to the series of awareness-raising and other approaches, the IDA described Bisei as fulfilling “its commitment to protecting the night sky by working with external partners.”

The IDA’s screening committee unanimously agreed on Bisei’s recognition as an International Dark Sky Community during a Nov. 1 meeting.

Maeno said renovation work at the Bisei Astronomical Observatory has been forging ahead, including expanding the observation deck.

“We will make further efforts to allow people to enjoy the night skies over Bisei and learn about space, so that as many individuals as possible will become its fans,” said Maeno.

Takashi Ogawa, 29, an official at Ibara city’s Bisei promotional division, said he has been involved in the municipality’s program to gain Bisei recognition as an International Dark Sky site since its start in 2018.

Ogawa, who also belongs to the Bisei tourism association's secretariat, led the city’s efforts to change streetlights to less-pollutive ones and push vending machine operators to switch off the lights at 10 p.m.

“Many inquiries have been coming in from tourist agencies and stargazing fans since it (Bisei) was certified as an International Dark Sky place,” Ogawa said.

Ogawa said he expects a guide training program that will start in November to show visitors the attraction of star-filled skies and how to observe celestial bodies will give local tourism additional momentum.

The remaining, long-standing challenge is the difficulty in hosting hordes of sightseers deriving from the district’s low number of restaurants and accommodation facilities.

“Taking advantage of the area’s increased profile, we will continuously put in as much energy as that invested in the certification program application into newer efforts,” said Ogawa. “We need to develop systems to have those from urban regions want to visit here two and three times as the next step.”