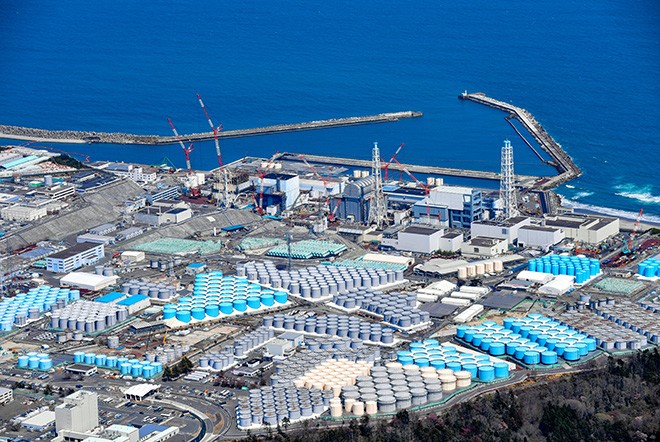 TEPCO has run out of space for additional water storage tanks at the Fukushima No. 1 nuclear power plant (Reina Kitamura)

The operator of the tsunami-wrecked Fukushima nuclear power plant said Wednesday that a data simulation of its planned release of treated radioactive water into the sea suggests it would have an extremely small impact on the environment, marine life and humans.

The Japanese government and the plant’s operator, Tokyo Electric Power Company Holdings, say they will start gradually releasing the water in the spring of 2023 so hundreds of storage tanks at the plant can be removed to make room for facilities needed for its decommissioning.

The plan has been fiercely opposed by fishermen, residents and Japan’s neighbors, including China and South Korea.

TEPCO plans to send the water through an undersea tunnel and discharge it about 1 kilometer away from the coastal power plant after treating and diluting it with large amounts of seawater.

According to the simulation, radiation levels of seawater right above the release point temporarily increased slightly but quickly fell to normal levels, TEPCO said, Exposure to radioactivity was significantly lower than the maximum safe levels set by international organizations, it said.

Government and TEPCO officials say tritium, which is not harmful in small amounts, cannot be removed from the contaminated water, but all other isotopes selected for treatment can be reduced to safe levels. Controlled release of tritium from normal nuclear plants is a routine global practice, officials say.

The simulation showed a slight rise in tritium levels within 2-3 kilometers from the plant, TEPCO official Junichi Matsumoto said.

But some experts say the long-term impact on marine life from low-dose exposures is still unknown.

The estimated radiation exposure for local fisherman in coastal areas, and for people who regularly consume seafood from the region was much less than 1 millisievert, an annual dose considered safe, TEPCO said.

Japan has requested help from the U.N. nuclear agency to ensure the discharge meets international safety standards and to gain the understanding of the international community.

A six-member team from the International Atomic Energy Agency, currently in Japan, visited the plant on Tuesday to inspect preparations for the planned discharge.

A massive earthquake and tsunami in 2011 severely damaged three reactors at the Fukushima Daiichi plant, causing large amounts of contaminated cooling water to leak. The water has been stored in about 1,000 tanks which the operator says will reach their capacity late next year.