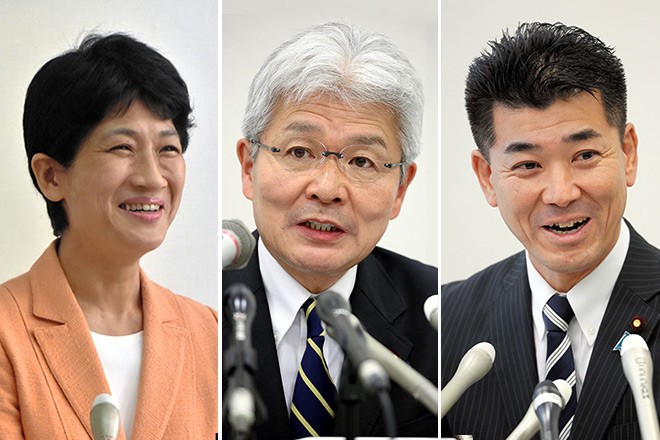 The three lawmakers who plan to run in the leadership election of the opposition Constitutional Democratic Party of Japan are, from right: Kenta Izumi, Seiji Osaka and Chinami Nishimura. (Koichi Ueda and Nen Satomi)

The three lawmakers vying to become the next president of the main opposition Constitutional Democratic Party of Japan agreed on one thing: the need to drastically change the party’s image.

Kenta Izumi, 47, the CDP policy chief, Seiji Osaka, 62, a former party policy chief, and Chinami Nishimura, 54, a former senior vice minister of health, labor and welfare, held news conferences on Nov. 17 to announce their intention to run in the election.

Campaigning will officially begin on Nov. 19 with the vote scheduled for Nov. 30.

The election was called to replace Yukio Edano, who stepped down as CDP leader following the party’s loss of 13 seats in the Oct. 31 Lower House election.

Nishimura said she wanted to bring diversity to the CDP so that it could create a more diverse society.

Other lawmakers had sought a female CDP president to highlight the party’s push for gender equality.

Nishimura may also have been influenced by the fact that two women ran in the LDP’s presidential election in October.

Nishimura said that having so few women in politics was a major problem, and she expressed her desire to have an equal number of male and female candidates in next summer’s Upper House election.

At his news conference, Izumi said: “I want to change the negative image long carried by the party into a forward-looking one. To do that, we must strengthen our policies and our arguments regarding foreign policy, economics and national security so that we are capable of taking over control of government.”

Izumi also cited the need to reinforce the party’s focus on reform by cutting wasteful government spending and entering policy discussions without the stance of just criticizing or opposing whatever the government proposes.

He also said he would work to rectify the growing disparity in society by providing peace of mind to everyone regarding basic services of medical care, care for the elderly and child care.

Osaka was asked to run by those who wanted a continuation of the course set by Edano.

“The CDP has not obtained sufficient trust from the public,” Osaka said at his news conference. “We lost seats in the proportional representation constituency because voters did not find us appealing.”

Pointing to his background as mayor of Niseko in Hokkaido, Osaka said he wanted to transform the CDP into a party seen as trustworthy and useful by the public.

Osaka added that he feels the CDP would be unable to respond to the thoughts of the public if it remains a small gathering. He said a larger and stronger party is needed to stand up to the LDP.