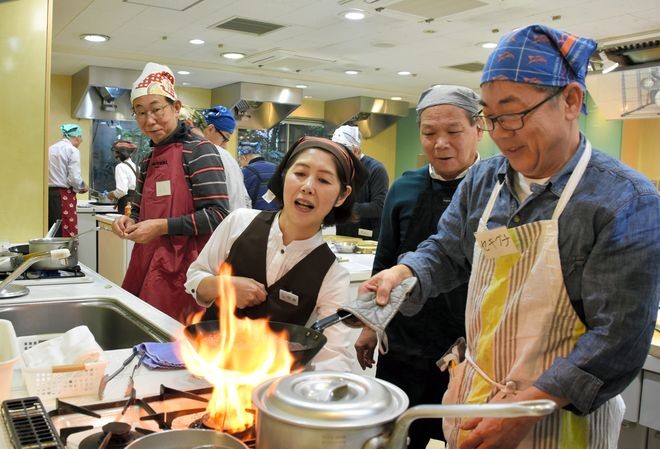 A man adds a dash of red wine to a meat dish during a cooking class targeting men in December 2019 in Tokyo’s Shibuya Ward. (Asahi Shimbun file photo)

About half of adult men responding to an online survey on manhood reckon life is harder for them than for women.

The survey by Dentsu Institute was carried out between August and September and covered 3,000 males nationwide aged between 18 and 70. The results were released Nov. 16 ahead of International Men’s Day, which fell Nov. 19.

The study also showed that younger men are more hesitant than their peers about tackling household chores by themselves.

The percentage of respondents who agreed with the premise that “men today face more hardships than women” accounted for 50.9 percent, 51.3 percent and 51.9 percent of replies, respectively, in the three age categories. No significant differences were detected among different age groups.

Forty-two percent of those aged 51 through 70 agreed with the notion that “a man who talks a lot about his worries, fears and problems shouldn’t really get respect.” The ratios for the 31-50 and 18-30 categories were 34 percent and 35 percent, respectively.

Respondents who agreed “it is not good for a boy to be taught how to cook, sew, clean the house and take care of younger children” made up 24 percent of replies in the 18-30 age group. Lower ratios of 16 percent and 11 percent applied respectively to the 31-50 and 51-70 age groups.

Asked whether they believe “a man shouldn’t have to do household chores,” 16 percent of those in the 18-30 age group agreed. The ratios for the other two groups were 11 percent and 9 percent, respectively.

Sayuri Nakagawa, a Dentsu Institute researcher involved in the study, speculated that the high ratio of men who believe life is harder for them than for women may be due to the fact that “circumstances favorable to men have changed amid growing awareness of gender equality.”

“Men probably are feeling more anxious as they come under pressure to alter their behavior,” Nakagawa added. “Younger generations display a passive attitude toward housework and child rearing. As men are increasingly pushed in and outside the home to engage in household duties, they may think that not much more is needed.”