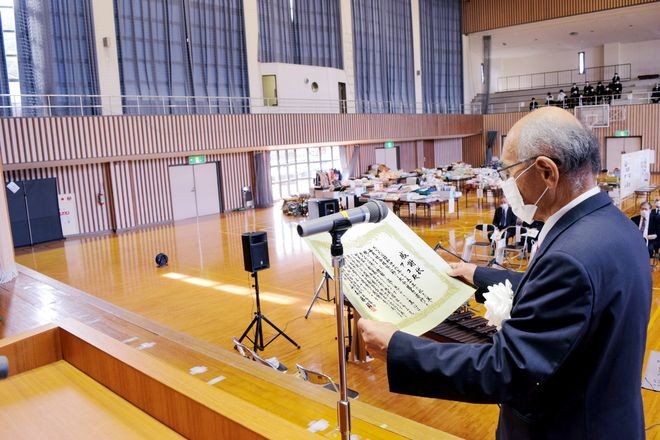 Katsuaki Yamamoto, chairman of the Oku-Izumo Council of Social Welfare issues a certificate of appreciation for Ako-san on Oct. 30 in Oku-Izumo, Shimane Prefecture, although the anonymous donor is not present as usual. (Tadashi Sugiyama)

OKU-IZUMO, Shimane Prefecture--Town officials and residents here remain baffled, yet extremely grateful, about a mystery that has continued for half a century.

For decades, monthly cash donations have been delivered to the Oku-Izumo Council of Social Welfare to promote the well-being of town residents. But they still have no idea who is sending the contributions.

The unknown donor has been referred to as “Ako.”

The social welfare council issued another certificate of appreciation to Ako-san at a ceremony in October. The recipient was again a no-show.

“The deep understanding and sincere warm sympathy (of Ako-san) is worthy of respect and admiration,” said Katsuaki Yamamoto, 78, chairman of the council, on stage. “The contributions for community welfare should be praised as an extremely great achievement.”

This was eighth certificate of thanks commending Ako-san, including those issued by the town mayor and the chief of the Shimane Council of Social Welfare.

On April 2, 1971, the social welfare council in what is now Oku-Izumo received a white envelope containing a 1,000-yen ($8.70) banknote and an unsigned letter that read, “Use this to improve social well-being.”

Since then, donations have been arriving at the council every month, with the contribution size gradually increasing.

In its publicity magazine, the social welfare council asked the donor for permission to use his or her name for a planned foundation containing the contributions.

The donor responded by asking that the fund be called “Ako,” which means “baby” in the local dialect.

Using interest from the Ako foundation, the municipal council and children in 1983 planted 10,000 marigold and salvia flowers at the local Nita Junior High School.

The students raised and distributed seedlings to “spread the wishes of Ako-san,” and Oku-Izumo soon became full of flora.

In 2009, the entire fund of 2.17 million yen was used to buy a 10-passenger vehicle to bring elderly citizens to and from social events organized to keep them active and prevent them from needing immediate nursing care.

The van was named Ako Magokoro-go (vehicle of Ako’s cordiality).

The social welfare council said Ako-san is likely a woman judging by the writing style in the letters. However, the handwriting has changed, and the differences in writing style became more obvious in letters sent after the start of the Heisei Era (1989-2019).

The council reckons that Ako-san’s family members and close acquaintances may have been helping with the sending of the donations.

The latest gratitude certificate was issued on Oct. 30 to coincide with a ceremony at the municipal gymnasium to mark the 50th anniversary of the Ako foundation.

Letters and more than 600 envelopes from Ako-san were shown at the ceremony.