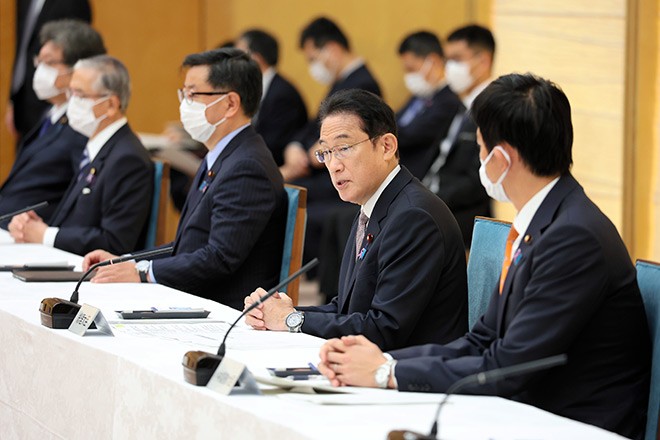 Prime Minister Fumio Kishida advanced his plan to strengthen Japan’s economic security on Nov. 19, convening the first meeting of relevant Cabinet ministers on the policy that day at the prime minister’s office in Tokyo.

The meeting was held to discuss measures to secure domestic supply chains for important items, including semiconductors, and prevent leaks of sensitive technology.

Kishida, at the meeting, instructed the ministers to quickly form a panel of experts to help draft his proposed legislation on promoting economic security.

The same day, a new section was set up in the Cabinet Secretariat that will bring together bureaucrats from a range of ministries to hammer out details of the proposal.

“It is crucial to fundamentally strengthen our country’s economic security measures as countries are racing to secure strategically important parts and materials and obtain key technology,” said Kishida, who considers economic security a key policy area for his administration.

He also urged the relevant Cabinet ministers to speed along drawing up the legislation.

A meeting of the expert panel is expected to be held soon. Its members will likely include Shigeru Kitamura, a former chief of the National Security Secretariat, which serves as the command center over the government’s diplomatic and security policies.

During his tenure as the NSS chief until July, Kitamura set up an economic team under it to promote economic security.

The government has already begun drafting the legislation on economic security. It includes four main areas in its broad outline: the supply chain; key infrastructure; technological foundation; and not disclosing patents for sensitive technological areas.

The legislation will include a subsidy program to strengthen domestic production of vital materials and parts, such as semiconductors, to ensure their steady supply.

The legislation is also likely to introduce a system where the government assesses whether products and equipment from nations considered a national security threat can be included in plans for new key infrastructure, such as communications networks and energy facilities.