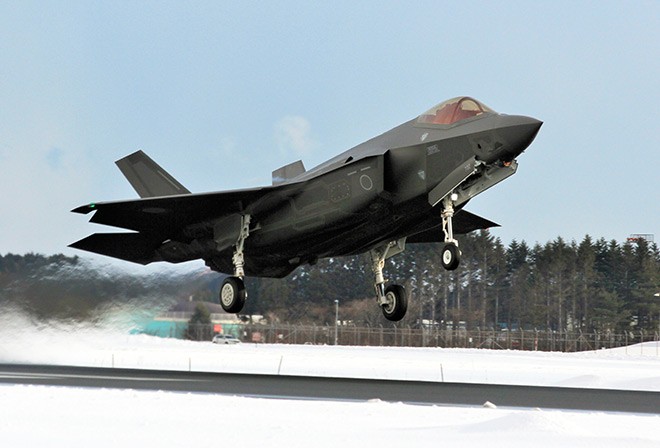 An F-35A stealth fighter jet takes off during a drill from the Air Self-Defense Force’s Misawa air base in January 2019. (Asahi Shimbun file photo)

Japan plans record defense spending in an extra budget expected to be announced along with an economic stimulus package on Friday, media reported, as former premier Shinzo Abe called for a “new level” of defense cooperation with ally Australia.

The developments come as Japan and Western allies including the United States, Britain and Australia respond to increased Chinese militarization in Asia-Pacific.

Japan plans to allocate at least 770 billion yen for defense in a supplementary budget that will form a part of the economic stimulus package to be finalized on Friday, Kyodo News reported.

That amount - the most for defense in a supplementary budget - would dwarf the 430 billion yen earmarked in an extra budget in fiscal 2019, and would include outlays for missiles and patrol aircraft, and for strengthening defense capabilities near the southwestern islands, Kyodo said.

Japan has long committed to keeping its military budgets within 1 percent of gross domestic product (GDP), a number that has eased concern at home and abroad about any revival of the militarism that led it into World War Two.

But with concern growing about China’s military in the disputed East China Sea, the ruling Liberal Democratic Party (LDP) included a goal of spending 2 percent of GDP or more on the military in its policy platform ahead of an election held on Oct 31.

Japan’s defense ministry wants money for an indigenous stealth fighter and missiles that can travel more than 1,000 kilometers, among others, while the country is also building up cyber, space and electromagnetic warfare capabilities.

Japan is also aiming to strengthen ties with allies and friendly nations such as Australia, a point that Abe--who resigned last year but remains influential in the LDP--made on Friday while taking part in an online seminar organized by an Australian think tank. “Given the regional security environment which has become increasingly severe, there is a need to elevate Japan-Australia bilateral security and defense cooperation to a new level,” he said in a speech for the event, also addressed by Indian Prime Minister Narendra Modi.

Abe said Japan should cooperate with the AUKUS security partners - the United States, Britain and Australia--on artificial intelligence, cyber capabilities and quantum technologies. The AUKUS pact is widely seen as a response to Chinese militarization in the region.