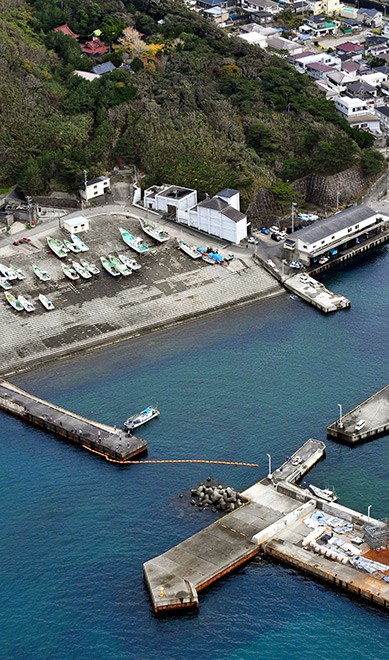 An oil fence is installed at Kozushima island port on Nov. 18. (Sayuri Ide)

The Tokyo metropolitan government has installed oil fences in the Izu island chain to protect fishing ports from a possible deluge of drifting pumice ejected from an underwater volcano months ago.

Small amounts of the floating stones have already been observed in the isle chain, which falls under the jurisdiction of the metropolitan government and extends south of the capital.

However, the Japan Agency for Marine-Earth Science and Technology (JAMSTEC), based in Yokosuka, Kanagawa Prefecture, has predicted that a large amount of pumice will reach the Izu island chain this week.

Designed to contain oil spills, the fences are being used as barriers to prevent the pumice from entering the mooring areas of the ports and impacting fishing operations.

The fence at Kozushima island is about 60 meters long while the one at Mikurajima island measures 40 meters.

The metropolitan government will consider whether other islands will require similar protections based on the movement of the pumice.

According to JAMSTEC’s analysis, the stones will remain around the Izu island chain until they move out to the sea late this month.

Since Nov. 9, small amounts of pumice have been confirmed at ports or offshore of seven islands in the chain, including Kozushima and Mikurajima, according to the Tokyo metropolitan government.

The stones are about 1 millimeter to 10 centimeters in size, and they have had no reported impact on vessel operations so far.

In Okinawa Prefecture, huge amounts of pumice from the volcanic eruption have clogged ports, fouled coasts and forced fishermen to remain onshore.

The Japan Meteorological Agency reported that the eruption of the Fukutoku-Okanoba underwater volcano, located 1,300 kilometers south of central Tokyo, continued from Aug. 13 to Aug. 15.

No eruption has since occurred, but the agency is carefully watching for volcanic activities in the Ogasawara island chain where Fukutoku-Okanoba is located.

“It is likely that volcano is still very much active under the seabed,” said a JMA officer responsible for the observations.

Mikurajima island has just the one port, so the oil fence there will be moved when fishing vessels need to enter the mooring area.

The oil fence on the western side of Kozushima island will not impact fishing boat operations for the time being. The island has two ports, and in autumn and winter, fishermen use the Miura fishing port located on the eastern side.

“If they install an oil fence at the Miura fishing port, we will have to suspend fishing,” said Yoshiki Maeda, general manager of the Kozushima Federation of Fisheries Cooperative.

Kazutaka Hamakawa, 43, a fisherman on Kozushima island, said he went out to sea to fish early in the morning of Nov. 18, and when he returned around midday, he saw pumice floating near the island’s port.

“We can avoid pumice during the daytime, but it is invisible at night,” he said. “We are scared that our ships might smash into a chunk of pumice, but we will see how things go and continue fishing. You can’t change how things are.”

His colleagues were forced to wrap up their fishing operations early on that day because a filter that allows seawater to flow into their vessel to cool its engine got clogged with pebbles.

Normally, about 10 fishing boats leave the Mikurajima island port a day if the sea isn’t rough.

“We will have to stop fishing for the time being if pumice reaches (our port),” said an official of the Mikurajima Federation of Fisheries Cooperative.

The official said the situation is regrettable because the season is approaching when the price for yellowfin tuna rises.

“We are so nervous,” the official said.