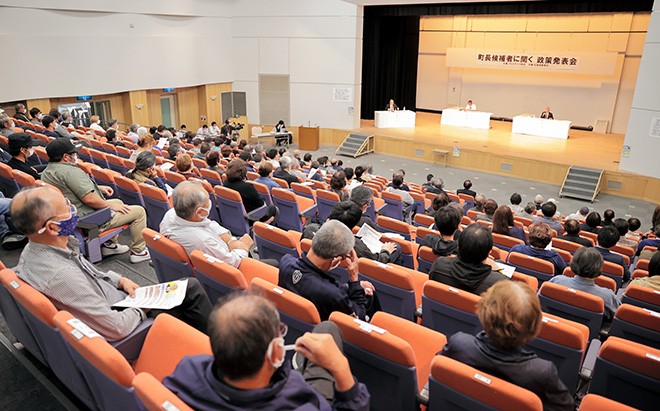 Two candidates running in the Suttsu town mayoral election in Hokkaido speak about their policies at a town meeting on Oct. 2 before about 130 residents. (Pool)

One year has passed since the start of the initial phase of assessing two municipalities in Hokkaido for their suitability to host a final disposal facility for high-level radioactive waste from nuclear power plants.

The first stage of the process, called “bunken chosa” (literature survey), or reviews of geological maps and research papers concerning local volcanic and seismic hazards and other related factors, has been under way since November last year for the town of Suttsu and the village of Kamoenai.

Under the government’s plan, the first-stage surveys take two years and will be followed by the second phase, called “gaiyo chosa” (preliminary investigation), which will include geophysical exploration, geological reconnaissance surveys and drilling surveys.

Both the Ministry of Economy, Trade and Industry (METI) and the Nuclear Waste Management Organization of Japan (NUMO), which are in charge of the repository project, say the process will not move to the next phase if the Hokkaido governor or the mayors of the municipalities express opposition.

Special “forums for dialogue” to share information about progress in the surveys and the project as a whole have been set up in the two municipalities. But debate within the local communities has barely begun.

Already, however, stories about divisions and conflict over the surveys are emerging from the local communities.

The mayoral election of Suttsu last month, for example, turned into a bitter and divisive political battle over the issue between the incumbent who decided to apply for the first-phase survey and a challenger who ran on opposition to the project.

Some of the neighboring municipalities have enacted an ordinance to ban the entry of radioactive materials. Both the Hokkaido prefectural government and most of the local administrations around the two municipalities have declined to accept state subsidies related to the surveys.

These actions have been driven by the fear that accepting the surveys will set in motion an unstoppable process leading to a permanent repository for nuclear waste.

Since the map of scientific features, which shows potential locations for deep geological disposal of high-level radioactive waste from the reprocessing of spent nuclear fuel, was published four years ago, NUMO and the METI have jointly held more than 100 meetings to explain the plan to local communities across the nation.

Even though they have continued calling for localities to volunteer, no local governments except for the two in Hokkaido have responded.

The government and NUMO should humbly accept the fact that the plan for deep geological disposal or the surveys involved are still far from being understood and considered by many local communities.

Policymakers should also realize that there is deep public distrust of the plan because it is based on the bankrupt program for recycling spent nuclear fuel.

During the leadership election of the ruling Liberal Democratic Party in September, one of the candidates, Taro Kono, promised to review the fuel recycling program and proposed geological disposal of spent nuclear fuel without reprocessing.

This approach has become mainstream in most other countries with nuclear power plants including some Scandinavian nations that have made significant progress in building final repositories.

If spent nuclear fuel is buried in geological disposal facilities without being reprocessed to extract plutonium and uranium, both the amount and hazard levels of the waste are greater. This means the current plan must be revised.

NUMO is an organization set up to “improve the environment” for nuclear power generation. The decision on the location of the envisioned final depository could be used as a pretext for continuing operations of nuclear reactors. There are concerns that nuclear waste could be brought into the facility indefinitely.

Prime Minister Fumio Kishida has pledged to implement “crisis management based on a worst-case scenario” for dealing with the COVID-19 pandemic.

If he is committed to this principle, Kishida should reconsider the final repository plan by accepting that both the nuclear fuel recycling program and the idea of reprocessing spent nuclear fuel, which could leave huge stockpiles of unusable plutonium, are already unrealistic.

The burden of tackling the issue of managing and disposing of the existing spent nuclear fuel should not be imposed on some specific areas. It should be shared by the entire nation, which has enjoyed the benefits of nuclear power generation.