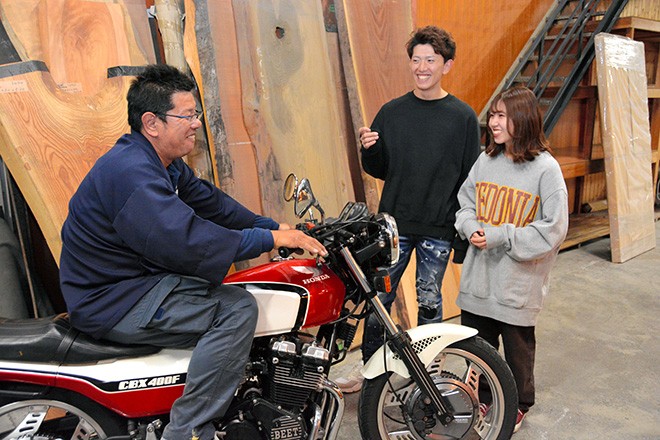 Hiroshi Banba sits on a Honda CBX400F at his home in Yorii, Saitama Prefecture, as his son, Yuma, and his daughter, Miyu, look on. Yuma gave the motorcycle to Hiroshi. (Nobuaki Tanaka)

YORII, Saitama Prefecture—As a child, Yuma Banba would ride on the back of his father’s Honda CBX400F motorcycle on a road trip.

Hiroshi, his father, would look back and ask, “Are you OK?” The little boy would nod in return.

Wearing a large helmet, Yuma would hold his father’s big back tight.

The red-and-white motorcycle would pick up speed, cutting through the wind with roaring exhaust sounds.

Hiroshi, now 44, was a member of a local motorcycle gang when he was young.

He kept his CBX even after he landed a job at a lumber shop and started a family. He appeared to be particularly taken with the shape of its curvy body and sound of the engine, and always kept it shiny.

One day, just before he entered junior high school, Yuma, now 25, noticed that the motorcycle was missing from the garden.

When he asked his father what happened to the bike, Hiroshi didn’t reply. Instead, he gave his son a new baseball glove and bat.

Hiroshi told his son to give it his all if he were to play baseball.

Growing up in a single-parent family with limited means, Yuma was determined not to be selfish. But his only wish was to play baseball in junior high school.

Yuma realized his father had sold off his beloved motorcycle to raise money for his baseball equipment. But being a man of few words, Hiroshi said nothing.

Yuma enjoyed playing baseball until he finished high school. Hiroshi prepared a bento lunch for Yuma every morning, made a practice area in a farm field in front of their home and escorted his son to and from baseball games.

However, Yuma thought his father looked less robust than he remembered when he found him watching TV on weekends instead of taking a road trip on his motorcycle.

After graduating from high school, Yuma started working at a local automobile plant. He worked hard until his hands were smeared black every day, saving a little from his paycheck every month to repay the sacrifice his father made.

One chilly day in spring this year, Yuma asked Hiroshi to come to a motorcycle maintenance shop.

When he arrived, Hiroshi looked puzzled, not knowing what was going on.

That moment, there was a deep bass exhaust sound that was all too familiar coming from outside before a red-and-white motorcycle was brought in.

“Oh, a CBX ...,” Hiroshi said, looking nostalgically at the bike with a smile.

Yuma handed Hiroshi the key, saying, “Dad, thank you for everything.”

Hiroshi looked surprised, but he didn’t say anything as usual. He just kept stroking the seat of the bike.

Yuma had asked his father’s acquaintance who runs the shop to find the same model of Honda motorcycle.

He was told to choose a different type because the CBX400F, which was manufactured for only several years in the 1980s, came with a premium price tag. But Yuma was determined to give the same model to his father no matter the cost.

Six months later, in October, three motorcycles were seen heading to the foot of Mount Fuji.

The CBX was followed by two bikes ridden by Yuma and his sister, Miyu, 21, who recently obtained their motorcycle licenses.

The family now takes a road trip together on weekends.

Watching Hiroshi ride his CBX from behind, Yuma thinks his father looks as robust as he remembered and turns the throttle to keep up with him.