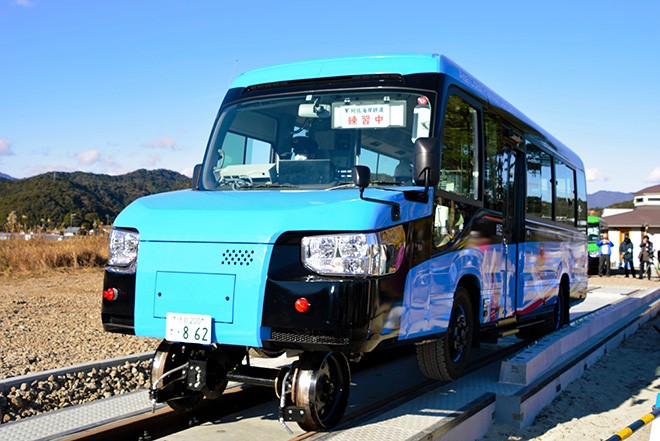 Officials from related local governments agreed on the Dec. 25 starting date at a meeting on Nov. 10.

Asa Seaside Railway is a Kaiyo-based semi-public company whose shareholders include the Tokushima and Kochi prefectural governments.

Remodeled from a microbus, the DMV is equipped with wheels to run on a railway line originally laid for diesel-powered trains. The vehicle can also operate on paved roads as a bus after leaving the tracks.

It was initially set to enter operations in July 2020. But its debut was repeatedly postponed after the novel coronavirus pandemic stalled negotiations with related authorities and delayed approval procedures.

In June this year, a technical assessment panel at the Ministry of Land, Infrastructure, Transport and Tourism pointed out the necessity of reinforcing the arm connecting the wheels and the body, forcing the company to delay the planned debut of the DMV from July to later in the year.

After the operator installed a reinforced arm, the ministry panel approved the vehicle’s safety on Nov. 4. On the same day, the ministry’s Shikoku District Transport Bureau also gave the company the green light to operate the DMV for its bus section.

“Christmas is the perfect day for the world’s first (commercial DMV operation),” said Kaiyo Mayor Shigeki Miura, who is also president of Asa Seaside Railway. “We will count down the days to the start of operations, hoping it will excite all residents and bring benefits to local areas along the lines.”

Hiroyuki Matsunobe, mayor of Toyo, Kochi Prefecture, added: “It’s so moving to see it finally becoming a reality. I feel that residents have a keen interest and high expectations.”

Asa Seaside Railway will train drivers, and its planned operations will undergo an inspection by the central government.

The company also said it plans to publicly display the vehicle and offer demonstration rides for locals before it starts commercial operations.

With a capacity of 18 passengers, the DMV will operate on the 16.1-kilometer Kainan-Shishikui Line and the 54-km Kainan-Muroto Line. It will run on railway tracks for 10 km between Awa-Kainan Station in Kaiyo and Kannoura Station in Toyo.

The vehicle shifts from bus mode to train mode, or vice versa, at the two stations.

The operator will start accepting online advance reservations on Dec. 2.

According to the Tokushima prefectural government, the annual number of passengers is expected to increase from the current 50,000 to 75,000, raising the company’s revenues by about 14 million yen ($123,000).

The DMV will make 13 round trips on weekdays and 11 on weekends and holidays (14 including nonregular services for the time being) on the Kainan-Shishikui Line connecting the Awa-Kainan Bunkamura cultural facility and the Shishikui Onsen roadside rest area, both in Kaiyo. The fare to the rest area is 800 yen.

The vehicle will make one round trip on weekends and holidays on the Kainan-Muroto Line linking Awa-Kainan Bunkamura and the Toromu seaside rest area in Muroto. The fare to the Toromu facility is 2,400 yen.