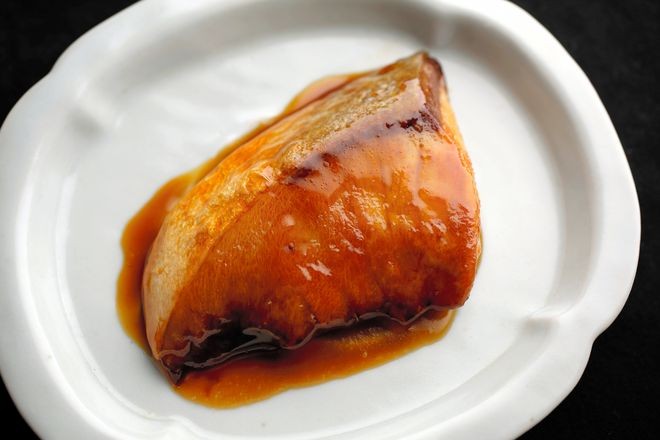 The second entry in our series on “seasonings that add sweetness” focuses on mirin.

We'll turn “buri” (Japanese amberjack) into a teriyaki dish by making the most of mirin's rounded and deeply sweet flavor.

The appetizing glaze is characteristic of dishes that incorporate sweet mirin sake.

After we coat the Japanese amberjack with soy sauce, we'll dust it with "katakuriko" starch and cook it on low heat. The soy sauce will give it a fine brown color, while the starch will thicken the sauce.

As you follow the recipe, you'll understand the reasoning behind the extra steps in the cooking process.

Mirin can also reduce the distinct smell of fish and meat. It's not a bad idea to substitute chicken for fish and cook it in the same way. As chicken thighs due to their skin and fat are thicker and take longer to cook, a key to having them turn out well is to pan-fry them slowly.

“Since the juice from the meat will flow out if the chicken is cut right after cooking, wait about two minutes before cutting,” says Akiko Watanabe, who oversaw the recipe's cooking aspect.

Whether you're making Japanese amberjack or chicken, your dish will look like it was prepared by a pro if you set a bit of sauce aside when reducing and pour it on top at the final stage.

MIRIN AN ALCOHOLIC BEVERAGE IN PAST

Mirin is made by saccharifying and aging rice “koji” (rice fermented with koji mold), sticky rice and shochu liquor over about three months, says Hiroshi Tachi, professor emeritus at the Tokyo University of Agriculture, who oversaw the recipe's cookery science aspect.

The expert in zymurgy, an area of chemistry that specializes in the study of fermentation, adds that mirin has an alcohol content of about 14 percent.

Mirin-style seasoning, in contrast, which is made in a short time by adding aminic and organic acids, among ingredients, to a sugar solution, has less than 1 percent.

To distinguish between the two, mirin is sold as “hon-mirin” (literally, true mirin). True mirin is recommended when you wish to reduce odor in a dish you're making.

Mirin was consumed as an alcoholic beverage in Japan until the Edo Period (1603-1867), when people began using it as a seasoning.

During World War II, it was regarded as a luxury item and its production was banned. Mirin is said to have become widely available around 1955.

1. Coat fish with soy sauce as base seasoning and leave it for 5 minutes. Mix seasonings.

4. Move fillets to one side in pan and wipe off oil (PHOTO B). Add seasonings and reduce on medium heat until sauce thickens. Turn fillets midway and allow sauce to coat both sides (PHOTO C).

Hiroshi Tachi is an expert in zymurgy and professor emeritus at the Tokyo University of Agriculture.

Prick holes all over 1 chicken thigh with fork, coat with 1/2 tsp soy sauce as base seasoning and leave for 5 minutes.

Pat chicken dry and thinly dust with katakuriko starch. Pour oil in frying pan on heat and place chicken skin side down.

Push chicken to a side and wipe off oil. Mix 1 Tbsp soy sauce and 3 Tbsp mirin.

Add to pan, bring to a boil and reduce until sauce thickens. Turn chicken midway and let sauce coat both sides.

When foodstuffs that emit strong odors are heated with mirin, the odor cooks out with the alcohol in the mirin.

Another reason for the removal of odor is the chemical reaction between the alpha-dicarbonyl compound in the mirin and the component of the odor.

It's been confirmed that after being heated with mirin, methylamine, a leading example of a fish odor component, significantly decreases.