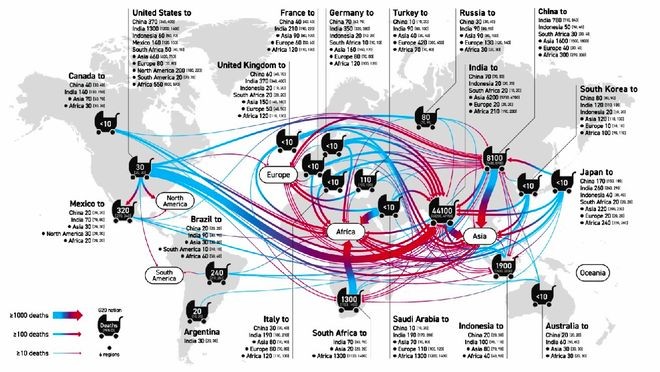 This chart shows relationships between air pollution and the economic consumption activity in each country. (Provided by the research team)

Japanese consumer activity is responsible for tens of thousands of premature deaths through air pollution every year, mainly in countries that export large amounts of goods to Japan, according to a new study.

A team of scientists crunched the numbers for how many people die earlier than the average lifespan in their countries and estimate that about 42,000 citizens, including 1,000 children under the age of 5, die younger than they should as a result of Japan’s economic activity.

They were 70 years old on average when they died.

Most of the early deaths are reported in China, India and other developing nations that are large exporters to Japan.

Keisuke Nansai, a senior official from the National Institute for Environmental Studies in Tsukuba, Ibaraki Prefecture, said businesses must provide better information so consumers can improve the situation through their purchasing decisions.

“Companies should disclose data on how they control atmospheric pollution, both domestic and globally, over their products’ lifecycles, so that consumers can select offerings from corporations that take thorough countermeasures.”

Researchers from the institute, along with scientists from Kyoto University, Kyushu University and elsewhere, published the findings in the scientific journal Nature Communications in November, available at (https://doi.org/10.1038/s41467-021-26348-y).

Because many products and services consumed in Japan and other industrialized countries are manufactured in emerging and developing countries, the team used a method known as inter-industry relations analysis to evaluate the health impacts caused by PM2.5 air pollutants emitted from local coal-fired power plants and factories producing items for export.

The scientists combined their results with population data to project how many people die prematurely from five major health issues connected to PM2.5 particles, including infectious diseases and strokes.

According to the World Health Organization’s estimate, 4 million individuals are predicted to die prematurely each year because of PM2.5, or fine particulate matter with a diameter of 2.5 micrometers or less.

This study reveals that 2 million of those 4 million deaths are caused by PM2.5 resulting from consumption in the Group of 20 regions, excluding the EU. Children under the age of 5 accounted for 80,000 of the victims.

Japan’s consumption is linked to about 42,000 early deaths a year, with 70 percent occurring outside the nation.

China is estimated to have 170 early deaths of children under 5 a year as a result of consumption in Japan, while India and Indonesia are estimated at 260 and 40, respectively. The number totals 970 overseas.

The production of goods in Japan leads to 17,000 annual premature deaths domestically. Those people die at the average age of 76 due to the negative health effects from PM2.5 particles emitted from industrial plants and coal power stations.

The domestic number is far smaller than the early deaths estimated outside the country, underlining the fact that consumption in Japan forces other countries to disproportionately suffer from the atmospheric pollution caused by its supply chain activity.