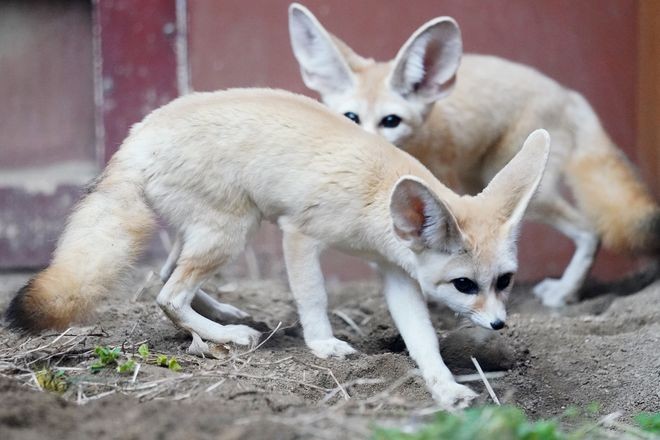 The fennec fox is characterized by its unusually large ears. (Toshiyuki Takeya)

Unusually large ears are the most distinctive feature of the fennec fox, a member of the world’s smallest canid species and native to the Sahara Desert encompassing much of North Africa.

With its beady eyes and fluffy fur, the nocturnal animal at first glance comes across as a dog, cat and fox all rolled into one.

An adult fennec measures between 30 and 40 centimeters and weighs 1 to 2 kilograms. Its body is covered in soft fur, which extends to the soles of the feet so the animals can walk on hot sand.

Having adapted to the harsh desert environment and its extremes in temperature, the foxes dig burrows to sleep in during the day when the sun is at its zenith.

“They have large standing ears for a reason,” said Risa Suzuki, an attendant at the Saitama Children’s Zoo Park in Higashi-Matsuyama, Saitama Prefecture, which keeps fennec foxes.

Their ears radiate heat, which helps regulate their body temperature, she said. Their acute hearing also allows them to detect moving prey.

“They are curious but timid in nature, so I don’t know how they would react to unfamiliar objects,” Suzuki said before a small camera was embedded in a wooden platform in the enclosure and pieces of raw meat were placed around it. The fennec fox kept a safe distance,

But as soon as the equipment was buried in the sand, it quickly dug it up.

The camera was then embedded in the platform again, with the base buried in the sand to mask its presence. The fennec fox took an interest in the lens filter and tried to bite and scratch it.

According to Suzuki, fennec foxes make various sounds to communicate with one another.

They make cooing sounds when they want to be spoiled and bark like dogs when they are on alert and ready to attack.