CDP election contenders all call for review of accord with JCP 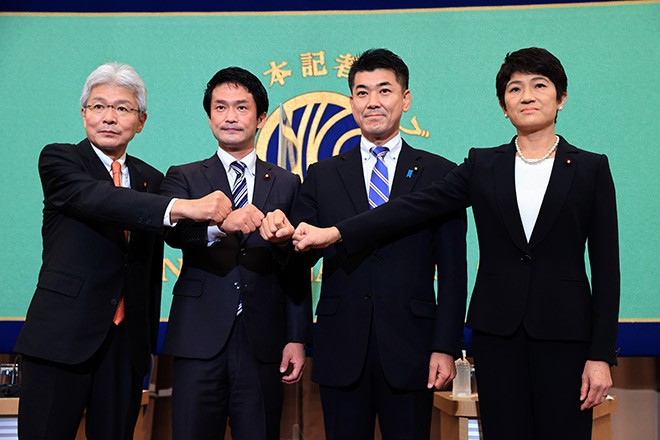 From left: Seiji Osaka, Junya Ogawa, Kenta Izumi and Chinami Nishimura pose before a debate at the Japan National Press Club in Tokyo on Nov. 22. They are running in the leadership election of the main opposition Constitutional Democratic Party of Japan. (Kazuhiro Nagashima)

All four candidates running for president of the main opposition Constitutional Democratic Party of Japan agreed on the need to reassess its much-criticized accord with the Japanese Communist Party.

Their views of the CDP’s alliance with the JCP were made during a debate on various issues at the Japan National Press Club in Tokyo on Nov. 22.

The four contenders said the accord, formed by then CDP leader Yukio Edano before the Oct. 31 Lower House election, was “not wrong” but needed a rethink.

Under the accord, if the CDP took control of the government, the JCP would cooperate on a “limited” range of policy issues, even if its lawmakers did not join the administration.

In the runup to the election, the CDP, the JCP, Reiwa Shinsengumi and the Social Democratic Party formed an opposition alliance and fielded unified candidates in 217 of the 289 electoral districts.

The CDP’s accord with the JCP was reached in last-ditch efforts to tighten solidarity in the opposition bloc.

But a number of supporters blasted the CDP’s promise to work with a party that has markedly different policies on national security and other issues.

Some said the accord with the JCP was a key reason for the CDP’s loss of 13 Lower House seats in the election.

Although Osaka entered the leadership race with support from a group calling for a continuation of Edano’s policy line, he indicated that the party should hold talks with the JCP over the pact.

He said Edano’s decision to partner with the JCP appeared “so out of touch with the public” and that the accord backfired in the election.

Osaka also said most voters did not feel the CDP had a realistic chance of ousting the ruling Liberal Democratic Party in the Oct. 31 election.

“It was difficult for the public to grasp what the party was trying to get across” with the pact, he said.

Izumi raised doubts about the effectiveness of the CDP’s election slogans of “forming an opposition-led administration” and achieving a “change of power.”

“Are they messages that voters really wanted to hear?” he said.

Izumi underlined the importance of keeping pace with other opposition parties, such as the Democratic Party of the People, which made gains in the Lower House election after keeping a distance from the opposition alliance.

Nishimura rated the CDP’s agreement with the JCP highly, saying it “contributed significantly” to fielding unified candidates in the Lower House election.

But she questioned the way it came about.

“The pact appeared to be reached abruptly at the behest of top leaders,” she said. “That made it difficult to gain an understanding from rank-and-file party members.”