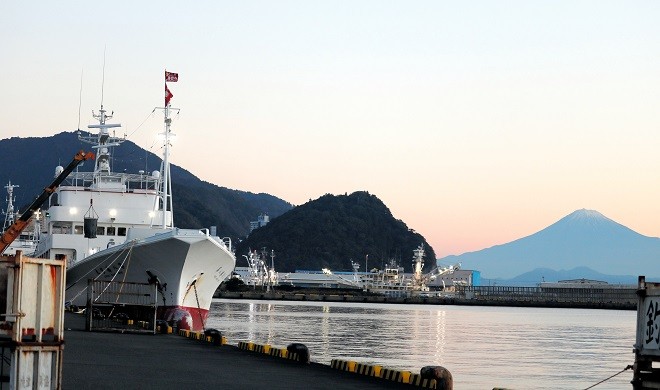 With Mount Fuji in the background, a fishing boat waits for its bonito catch to be unloaded at Yaizu Fishing Port in Yaizu, Shizuoka Prefecture, early on Nov. 15. (Etsuko Akuzawa)

YAIZU, Shizuoka Prefecture--Allegations of systemic corruption in the fishing industry have rocked this port city, which boasts the country’s top haul of bonito.

Locals in the central Japan city say they feel betrayed because the suspects were engaged in dodgy dealings of bonito, the pride and joy of Yaizu.

A worker at a fishermen’s cooperative and former executives of a marine food processing company were among those indicted on charges of stealing tons of a bonito catch.

Some industry sources said such illegal practices have a long tradition in Yaizu.

On mornings, nets carrying frozen bonito are moved by crane from fishing boats onto conveyor belts at Yaizu Port. Assorted by size and weight, the fish are placed on different pallets before being shipped to a marketplace.

During this work process earlier this year, some of the bonito were illegally rerouted, according to the investigation.

Prosecutors on Nov. 16 indicted five of them on theft charges, including Kazuo Shindo, a 60-year-old former president of Kaneshin JKS, and Minoru Yoshida, a 40-year-old worker with the fishermen’s cooperative.

The remaining two suspects were released without indictment.

The five are accused of conspiring to steal 4.4 tons of frozen bonito, worth 1.04 million yen ($9,040), from Kyokuyo Suisan Co., a Yaizu-based fisheries company, at the cooperative’s Gaiko (outer port) fish market on Feb. 8, according to the indictment and other sources.

Frozen bonito are customarily measured and auctioned off by the fishermen’s cooperative after being carried into a marketplace.

The fish are then moved to warehouses outside the cooperative’s grounds, with the names of the winning bidders and other information shown clearly on each pallet.

The two shipping agency workers are believed to have bypassed the measurement process and taken the stolen frozen bonito to a warehouse.

Yoshida, a section chief in charge of the Gaiko fish market, supervised work at the site, including the measurements.

Investigators said the stolen fish were likely processed into cat food and other products and then sold.

Yoshida and others received around 100,000 yen as a reward from Yoshiyuki Okuyama, a 47-year-old former managing director with Kaneshin JKS who has been indicted in the case, the investigators added.

‘HAUL ENDS UP SMALLER WHEN LANDED AT YAIZU’

Yaizu Port accounts for 47 percent of Japan’s total haul of bonito, with 111,081 tons landed there in 2019, about triple the figure for runner-up Makurazaki Port in Kagoshima Prefecture.

Yaizu is near major consumption centers, including the greater Tokyo area, and is also located conveniently for distribution. An expressway interchange is only about 10 minutes away, and deep-freeze warehouses and processing plants abound near the city’s fishing port.

“Yaizu became the seat of more and more facilities of the sort because physical distribution is less costly here than at other ports, which helps keep unit prices low,” said an official with the fisheries promotion division of the city government.

Bonito have become a symbol of the city.

Yaizu’s dried bonito is presented every year to the imperial household, and restaurants in the city hold a fair of bonito dishes in spring and autumn.

“The damage done to our reputation is so hard to bear,” said a shopkeeper in the Yaizu Sakana Center (“sakana” is Japanese for fish) where many stores dealing in marine products are located.

One indignant fisherman said: “It takes us days to go out to sea, where we risk our lives to catch fish. I just can’t forgive what those people did.”

He voiced particular anger over the suspected involvement of the fishermen’s cooperative workers.

“I put confidence in them, but they betrayed us,” the fisherman said.

A worker in the marine food processing industry also said dismissively, “The fishermen’s cooperative has lost its credibility.”

An official with Kyokuyo Suisan, the apparent victim in the latest case, suggested the theft was not an isolated incident.

“There was rumor for some time that your haul ends up smaller when you have it landed at Yaizu,” the official said.

A senior official with the fishermen’s cooperative went further.

“There were other illegal and more extensive practices than the act that led to the indictments,” the senior official said. “And they have been there for some time.”

Since the scandal surfaced, several other marine product companies have consulted prefectural police about possible thefts.

To prevent a recurrence, the fishermen’s cooperative has dispatched security guards and started checking the freight on trucks, among other measures.

An inhouse investigative panel that includes a lawyer will interview all 120 or so cooperative workers and compile a report by the end of November at the earliest, sources said.

The Yaizu fishermen’s cooperative has concluded a separate investigation into the long-standing practice of cooperative auctioneers giving free bonito to brokers without the permission of shipowners, a document showed.

Bonito can lose their freshness if they take longer to freeze, such as during good hauls.

According to the cooperative’s document, which was shown to shipowners, if brokers complained about the freshness of the fish, the auctioneers would give them free, unmeasured bonito from the next haul as compensation without informing the shipowners.

That practice started a very long time ago, the document, dated in September, said.

The document called the compensatory practice “inappropriate,” although it said the top echelons of the cooperative were not aware of it.

The cooperative apologized to the shipowners and said it was willing to pay settlement money.

However, no payments had been provided as of Nov. 19 because some shipowners are calling for a reinvestigation.

“What happened shouldn’t have been allowed, although we were not aware of it as an organization,” a cooperative representative said.

(This article was written by Takuya Yamazaki, Akari Uozumi and Etsuko Akuzawa.)