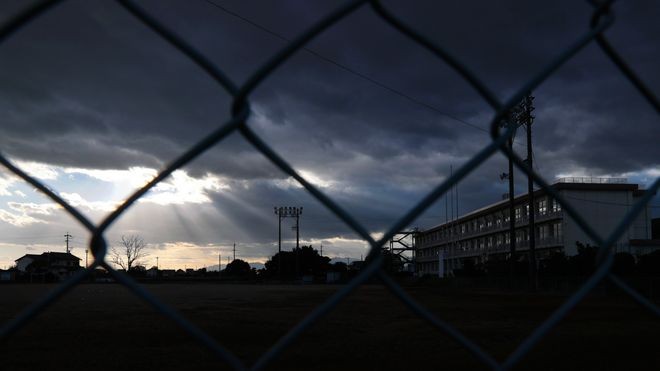 The school building where a student was stabbed to death on Nov. 24 in Yatomi, Aichi Prefecture (Takeshi Iwashita)

YATOMI, Aichi Prefecture--A third-year junior high school student died after being stabbed at his school here on Nov. 24 and another student was arrested in connection with the attack.

According to the police and the fire department, the 14-year-old student was stabbed in the stomach. He was rushed to a hospital but pronounced dead.

Aichi prefectural police made an emergency arrest of another 14-year-old boy who is in the same grade as the deceased, on suspicion of stabbing the victim and an attempted murder.

The student has admitted to the charges, telling police, “I certainly did it.”

According to the Yatomi Board of Education, there was trouble reported between the two students at the school, which has an enrollment of about 140 students. There are currently about 45 students in their third year.

Staff at the junior high school made a 119 call at around 8:10 a.m. on Nov. 24 to emergency responders, saying, "Please come to our school quickly."

A woman in her 50s who lives nearby reported going out of her home after hearing sirens and seeing police cars parked on the school's premises.

“I saw a student being carried out on a stretcher," she said. "After a while, I saw another student in his school uniform, sandwiched between policemen, being led to a police car.”