Japan will release state oil reserves for the first time ever 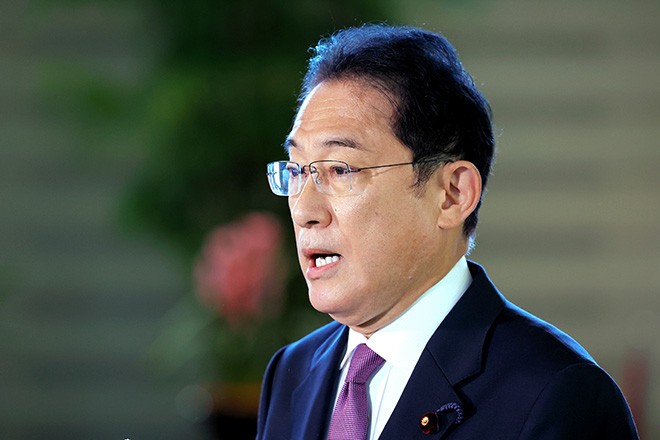 Prime Minister Fumio Kishida declares that Japan will draw from its state oil reserves in comments made at the prime minister’s office on Nov. 24. (Koichi Ueda)

Prime Minister Fumio Kishida declared on Nov. 24 that Japan will release its state oil reserves for the first time ever in a bid to ease the soaring price of crude.

It came on the heels of the Biden administration’s announcement that the United States is tapping into its own emergency oil reserves, as part of a coordinated effort with Japan, China, India, South Korea and Britain to suppress rising prices.

“In tandem with the United States, we decided to sell a portion of the state oil reserves in a way that won’t infringe on the oil stockpiling law,” Kishida said.

A few days’ worth of domestic demand is expected to be released, according to officials.

“Stabilizing the price of crude is a very important task to achieve our economic recovery from the COVID-19 pandemic,” he told reporters at the prime minister’s office. “On top of that, we would like to urge oil-producing nations to expand production, take countermeasures for each industry, like agriculture and fisheries, and ease the sharp hike in gasoline and oil prices to the fullest extent.”

After the price of crude shot up, the U.S. government announced on Nov. 23 it would release 50 million barrels from its oil reserves. It aims to push the price down by temporarily increasing supply, in lockstep with other top oil-consuming countries, including Japan.

But at the New York Mercantile Exchange on Nov. 23, the closing price of U.S. WTI crude futures, the main indicator for the price of crude, increased by $1.75 (201.20 yen) from the previous day to $78.50 per barrel, meaning the effectiveness of that concerted effort so far remains unclear.

Japan has state-owned oil reserves and private-sector oil reserves, which oil companies are mandated to stockpile by law.

Japan’s private-sector oil reserves were released during the 1991 Gulf War and following the 2011 Great East Japan earthquake and tsunami, but turning on the taps to release the state’s oil reserves is an unprecedented move.

Currently, the reserves amount to 240 days of domestic demand, as of the end of September. Of that, the state's oil reserves make up 145 days’ worth, which is beyond its target of having 90 days’ worth on hand.

Domestic oil consumption has been trending downward due to energy conservation, so the government plans to release the surplus oil by the end of the year.

Under the oil stockpiling law, releasing the oil reserves is limited to times of supply shortages due to conflicts or natural disasters.

The government has apparently judged it will not face legal problems in releasing the surplus. But given that it has stated the goal is to lower the price of oil, it will face scrutiny over how consistent the policy is with its past explanations.

The government decided on an economic package on Nov. 19, which includes giving financial assistance to oil wholesalers to curb the stiff rise in the price of gas. It is considering financing that with the profits made from releasing its oil reserves and selling them through bidding.