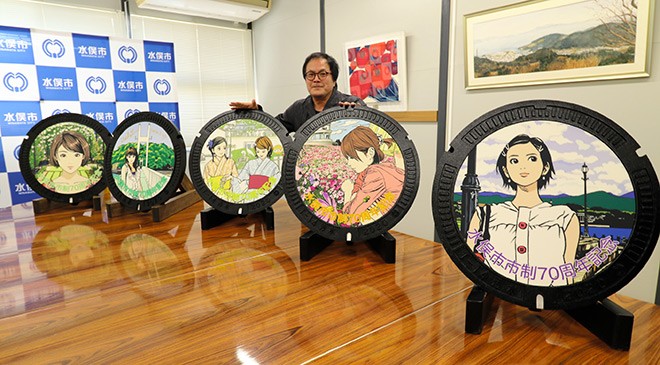 MINAMATA, Kumamoto Prefecture--Manga artist and native son Hisashi Eguchi reckons his new gig as this city’s first tourism ambassador is to help the good citizens of Minamata overcome their traumatic past.

“An atmosphere has long lingered in Minamata where it was difficult to discuss plans to promote tourism,” Eguchi said in his inaugural greeting. “That was because we shared a sad history. We should not be overwhelmed by history but learn from it for the future.”

He was referring to Minamata disease, the mercury poisoning caused by industrial pollution, which catapulted the southwestern city to national and global attention.

Still, Eguchi emphasized: “It is time to highlight the charms of today’s Minamata while handing down lessons from the past to future generations.”

The 65-year-old received a letter of appointment as tourism ambassador from Minamata Mayor Toshiharu Takaoka during the opening ceremony of a fireworks display on Nov. 13.

The city expects Eguchi to show off its appeal for people both in Japan and overseas, utilizing social media and other means.

Eguchi made his debut as a manga artist in 1977 and went on to make a name for himself with “Susume!! Pirates” and “Stop!! Hibari-kun!”

Eguchi, who is also known as an illustrator, has designed tourism promotion posters for Minamata since fiscal 2008. He provided the designs for manhole covers last year.

His illustration was adopted for a national stand-up paddle board championship scheduled to be held in Minamata in fiscal 2022.

Minamata disease was officially confirmed in 1956. The neurological disorder was caused by wastewater containing methylmercury released into an inland sea from the chemical manufacturer Chisso Corp.’s factory in Minamata.

Many residents developed numbness, impaired vision and other symptoms after eating contaminated fish and shellfish.

About 70,000 people have suffered from mercury poisoning, including more than 2,000 officially recognized as Minamata disease patients.