Volcanic pumice floats to shore of Miyakejima south of Tokyo

Pumice stones from the eruption of an undersea volcano float in waters near the western shore of Miyakejima island, about 180 kilometers south of central Tokyo, on Nov. 23. (Masahiro Hirano) 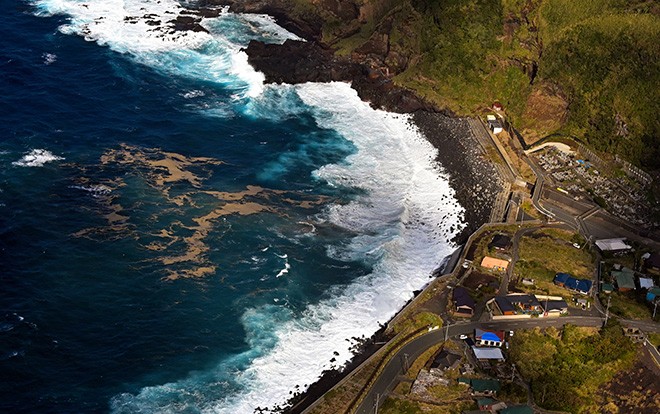 Pumice stones approach the shore of the western part of Miyakejima island of the Izu isle chain south of central Tokyo on Nov. 23. (Kotaro Ebara)

Aerial footage showed numerous pumice stones floating in waters off the Igaya and Ako districts on the western part of the small island on Nov. 23.

The pumice was ejected from an underground volcano farther south more than three months ago.

Islanders say the stones began reaching the island in large numbers around Nov. 21.

Local fishermen have set up oil fences to prevent the pumice from entering ports.

The local tourism association said operators of fishing boats for tourists have been forced to stay on land because of concerns the pumice could damage the engines of their vessels.

The eruption of the Fukutoku-Okanoba volcano, located 1,300 kilometers south of Tokyo, continued from Aug. 13 to Aug. 15, according to the Japan Meteorological Agency.

Coastal regions of many prefectures along the Pacific, including Okinawa and Kagoshima in southern Japan, have reported damage from the pumice as it drifts northward riding on the Kuroshio Current.