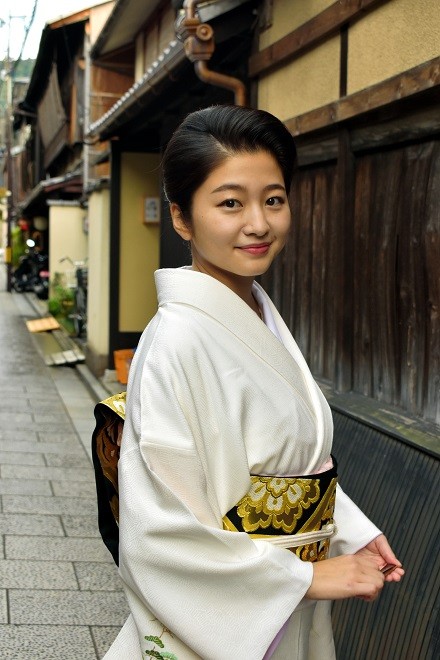 Satsuki poses for the camera in Kyoto’s Higashiyama Ward on Nov. 1. (Satoko Onuki)

KYOTO--A star geisha from Gion-Kobu, one of the five major “kagai” traditional entertainment districts of this ancient capital, left her job in November when she married.

With an overseas stint and many TV appearances, 27-year-old Satsuki was a major presence even outside the kagai. She said she will live in Tokyo for the time being but is hoping to return to Kyoto someday.

A native of Osaka Prefecture, Satsuki debuted as a “maiko,” an apprentice geisha, in 2011 after she finished junior high school. She was promoted to the status of a regular geisha, called “geiko” in the special parlance of Kyoto, in 2015.

For seven years in a row, she won the top Baika Shorei-sho prize, which is awarded to the geiko or maiko with the highest annual proceeds in Gion.

She was a popular figure even outside banquet rooms, which were her main turf. She appeared on various TV shows and once even served as a poster girl for the Tourism Authority of Thailand.

“I was so lucky with human connections,” Satsuki said. “The past decade has been really fun.”

She said she decided in May to bow out. She previously believed she should “keep running at full speed” until she was 30, but consequences of the COVID-19 pandemic changed her mind.

For example, she had a kimono made on the motif of ume (Japanese plum) and snow, which is only good for wearing over a short spell of days before spring rolls around. However, she had no opportunities to wear it because there were no banquets for her to attend.

In the meantime, she began fishing. Starting in March, she also began appearing in a series of YouTube videos titled “Satsuki ga Yuku!” (There goes Satsuki!), in which she shows herself visiting and interviewing Kyoto’s traditional craft workers.

“I have had more time to reflect on myself,” Satsuki said. “And I developed this desire to see the broader world outside this trade, which I have been in ever since I was 15.”

She said when Inoue Yachiyo V, the head of the Kyomai Inoue school of traditional dance, learned that Satsuki was leaving, she told her, “Oh, I will miss you, but you should be happy.”

It is customary for a geiko bowing out on friendly terms to make the rounds of her familiar “teahouses” (restaurants) and other connections to pay courtesy visits, accompanied by an “otokoshi” (male attendant), whose job is to look after geiko and maiko with their dressing and other needs.

Gripping cameras in their hands, many of Satsuki’s fans tagged along after her on Nov. 1 to film scenes of her courtesy visits for posterity.

Satsuki said while she plans to live in Tokyo once she retires, she will be back in Kyoto sooner or later.

“I love Kyoto,” she said. “I hope to engage in activities that allow many people to learn about the culture of kagai, which I know about precisely because I was in there.”