EDITORIAL: Japan must pin U.S. down on pledge to scrap auto tariffs 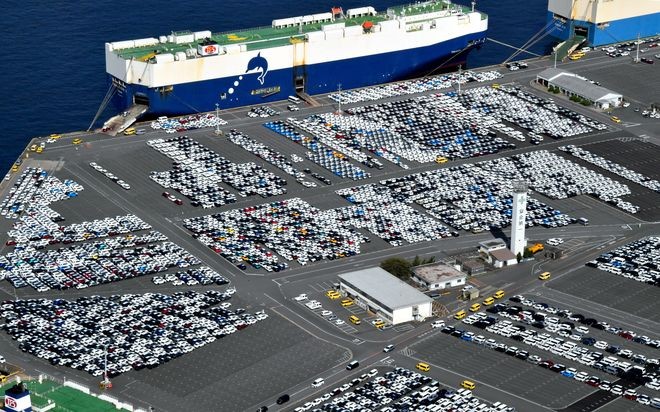 The car export base of Toyota Motor Corp. is seen at Nagoya Port in 2019. (Asahi Shimbun file photo)

The government promised that U.S. tariffs on Japanese car exports would be scrapped when it made its case for a new bilateral trade agreement that took effect in January last year.

Then Prime Minister Shinzo Abe and other top administration officials said the future elimination of the existing U.S. tariffs on Japanese autos and auto parts was part of the deal. But nothing has transpired so far.

If the government made an empty promise to cover up the fact that the agreement was an “unequal treaty,” this is a deception that cannot be overlooked.

The deal has lowered Japanese tariffs on U.S. farm exports to Japan, including beef, to the levels agreed upon under the Trans-Pacific Partnership (TPP) agreement despite former U.S. President Donald Trump’s decision to withdraw Washington from the multilateral trade pact.

On the other hand, the United States stopped short of promising to eliminate its tariffs on Japanese cars even though Washington was committed to the step under the TPP.

The only reference to the issue is included in an “annex” to the bilateral agreement about U.S. tariffs, which says, “Customs duties on automobile and auto parts will be subject to further negotiations with respect to the elimination of customs duties.”

Abe and his trade negotiators repeatedly said the elimination of the tariffs was “an assumption” of the agreement as they persuaded the Diet to approve the deal. The government said the import duties would be eliminated in the second stage of the negotiations.

There are, however, no signs that the talks are about to start even though two years have passed since the two governments inked the deal. Instead, Tokyo and Washington last week launched a new framework for talks on bilateral economic cooperation, effectively putting the auto tariff talks on ice.

If the U.S. tariffs on Japanese cars are not removed, the Japanese tariffs to be eliminated under the agreement would be worth four times the value of the U.S. tariff cuts, according to an estimate by The Asahi Shimbun.

This casts serious doubt on then Foreign Minister Toshimitsu Motegi’s claim that it would be a “win-win” deal for both countries.

There is clearly an inconsistency between what the government said about the agreement and the reality. The government needs to clarify the responsibility for its flawed explanation about the deal, which has turned out to be at odds with the facts, and present its plan for further negotiations to the public.

What should not be forgotten is the fact that the issue of whether the United States will scrap its tariffs on Japanese car exports is not a simple question of gains and losses for the two countries.

The World Trade Organization rules require free trade agreements to eliminate at least about 90 percent of the tariffs involved.

If the U.S. auto tariffs are not eliminated, Washington’s tariff elimination rate would be less than 60 percent. In addition, neither Japan nor the United States has fulfilled its obligation to report the agreement to the WTO.

These facts mean that the two nations are abandoning their roles as leading economic powers that should serve as major drivers of free trade. Tokyo and Washington should swiftly enter the second stage of the trade talks for the elimination of the U.S. import duties on Japanese automobiles and report their trade deal to the WTO as required.

The U.S. administration of President Joe Biden has allowed the additional U.S. tariffs on Japanese steel and aluminum imports imposed by Trump to remain in place. These additional tariffs are an unjustifiable measure introduced by the Trump administration under the flimsy pretext of national security and should be removed immediately.

Last week, Tokyo and Washington also agreed to work together on a “Japan-U.S. common global agenda" for trade and cooperation in the Indo-Pacific region. The move is an apparent attempt by the Biden administration to establish a new multilateral trade framework under the U.S. leadership.

The Biden administration is unwilling to consider rejoining the TPP since opposition to the pact remains strong at home.

We welcome active U.S. commitment to the Asia-Pacific region. But the TPP is now entering a new phase as both China and Taiwan have applied to join the pact.

The Japanese government should make tenacious efforts to convince the Biden administration to bring the United States back into the TPP.